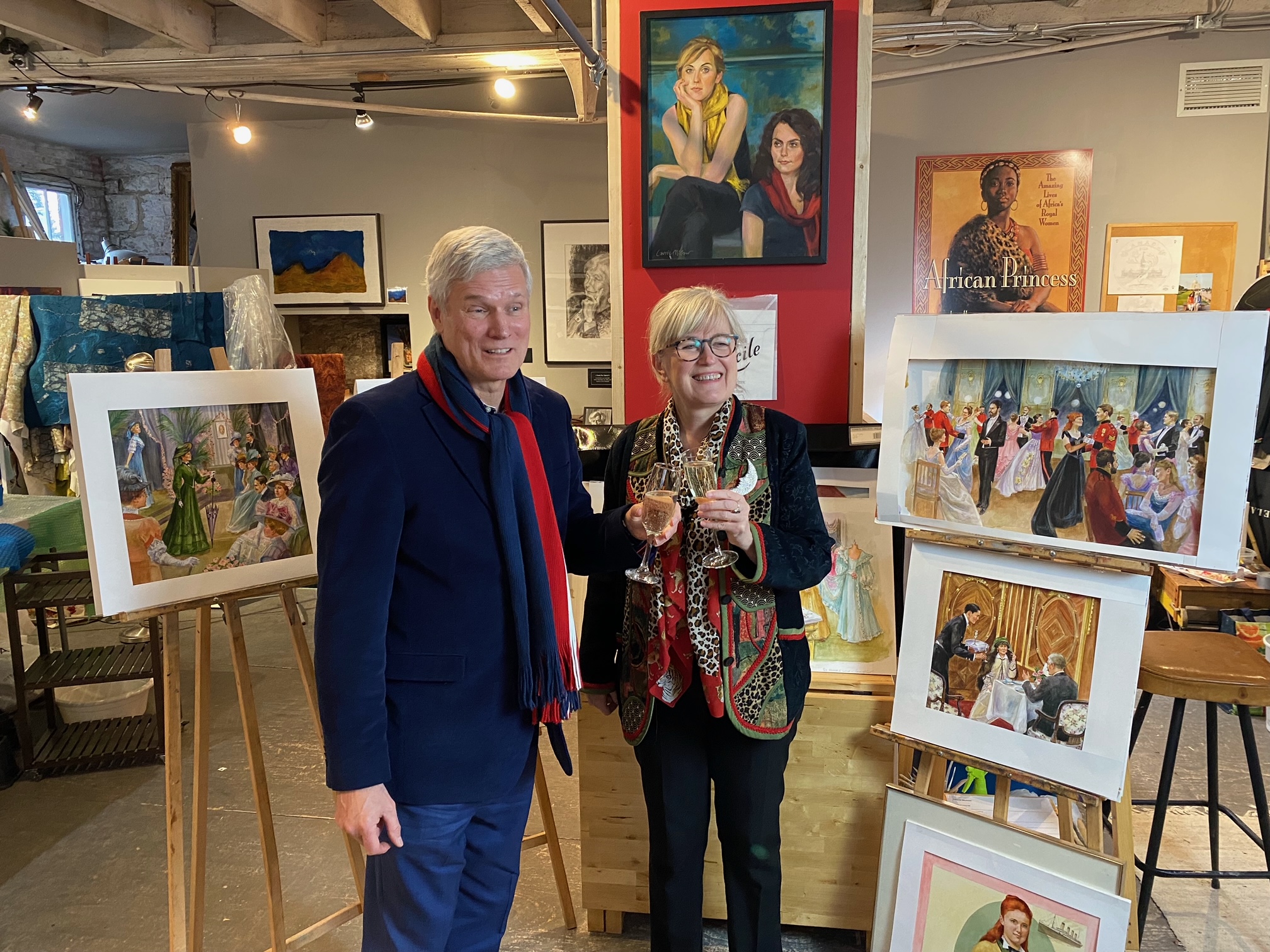 Celebrate the launch of Unsinkable Lucile: How a Farm Girl Became the Queen of Fashion and Survived the Titanic at the Civic Museum. Author Hugh Brewster and illustrator Laurie McGaw will give a special presentation on the story of Lucile.

Copies of Unsinkable Lucile will be available for purchase in the museum’s Hilltop Shop.

Space for this event is limited. Reserve your FREE tickets via Eventbrite.

She was one of the world’s most glamorous women and the most famous fashionista of the Edwardian age. Yet, couturiere Lucile, Lady Duff Gordon was born as just plain Lucy Sutherland and grew up in a stone farmhouse just outside of Guelph in Ontario, Canada. How she went from a backwoods community to presiding over an international fashion empire is a remarkable story of unshakeable determination and female achievement at a time when it was thought that a woman’s place was in the home.

Unsinkable Lucile is a lavishly illustrated story of Lucile’s lively childhood, her rise to the top of the fashion world and her survival of the Titanic disaster and its aftermath, during which she was unjustly vilified. Time and time again, she proved that nothing could sink her spirits or stop her drive to innovate and create.

Among Lucile’s many innovations were the first fashion shows, the first fashion models and the Edwardian craze for oversized hats. She also helped free women from the corset and coined the word chic. Lucile was also a fashion adviser to millions and the creator of clothes seen in over 115 movies.

Replete with historical photos and beautiful paintings by award-winning illustrator Laurie McGaw, Unsinkable Lucile is a humorous, touching and empowering tale of a woman who beat the odds, never backed down and changed the world of fashion forever. Hugh Brewster is a Canadian editor, writer and publishing executive who has worked on many books for children, while being involved in the publishing industry for over 30 years. He began his career in 1971, as a manuscript editor at Pocket Books Canada. In 1972, he joined Scholastic Canada as an editor and eventually became responsible for several of Scholastic’s school Book Clubs. While there, he also started a successful teacher’s book club, a book club for families, and was involved in the creation of Scholastic’s Canadian book publishing program. In 1980 he was transferred to New York as Manager of the Adult Marketing Division of Scholastic U.S.

He was instrumental in the founding of Madison Press Books in 1979 and returned to Canada in 1984 to become Vice-President, Editorial Director and Publisher. As a writer, his children’s books have won a number of major awards, including the Norma Fleck Award for At Vimy Ridge. He also wrote Dieppe: Canada’s Darkest Day of WWII, and On Juno Beach: Canada’s D-Day Heroes. Hugh has made television appearances on CTV’s Canada AM, City TV’s Breakfast Television, and CHCH’s Morning Live. He is also a guest lecturer for publishing programs at Centennial College and Ryerson University.

Laurie McGaw is well known for her vibrant portraits of such renowned figures as jazz artists Oscar Peterson and Gene Di Novi and film director Norman Jewison. She is also known for her award-winning illustrated books: Polar the Titanic Bear, nominated for a Governor General’s Award, has sold over 680,000 copies in five languages. A New York Times review described her portraits for African Princess as “stunning”; she was honored for her work by the NAACP. Portraiture has been featured on four collector’s coins that she has designed for the Royal Canadian Mint, including the 2007 proof silver dollar and a $300 gold coin series celebrating the Vancouver 2010 Olympic Winter Games. A graduate of The Ontario College of Art & Design, and a former instructor there, Laurie continues to teach: she conducts portrait painting workshops biannually and teaches master classes to small groups throughout the year. The focus of her work is portraiture. Whether in commissioned works, illustrations, or historical paintings, her love is painting people.

Laurie McGaw’s work has been featured in books, magazines, and private and corporate collections for over 30 years. People are drawn to her work because of her ability to reveal the sitter’s inner qualities with warmth and respect. “Laurie McGaw’s portraits have a lively attention to detail that definitively captures the fine nuances of her subject’s personality.”—Signe Ball, Publisher, In the Hills Magazine.