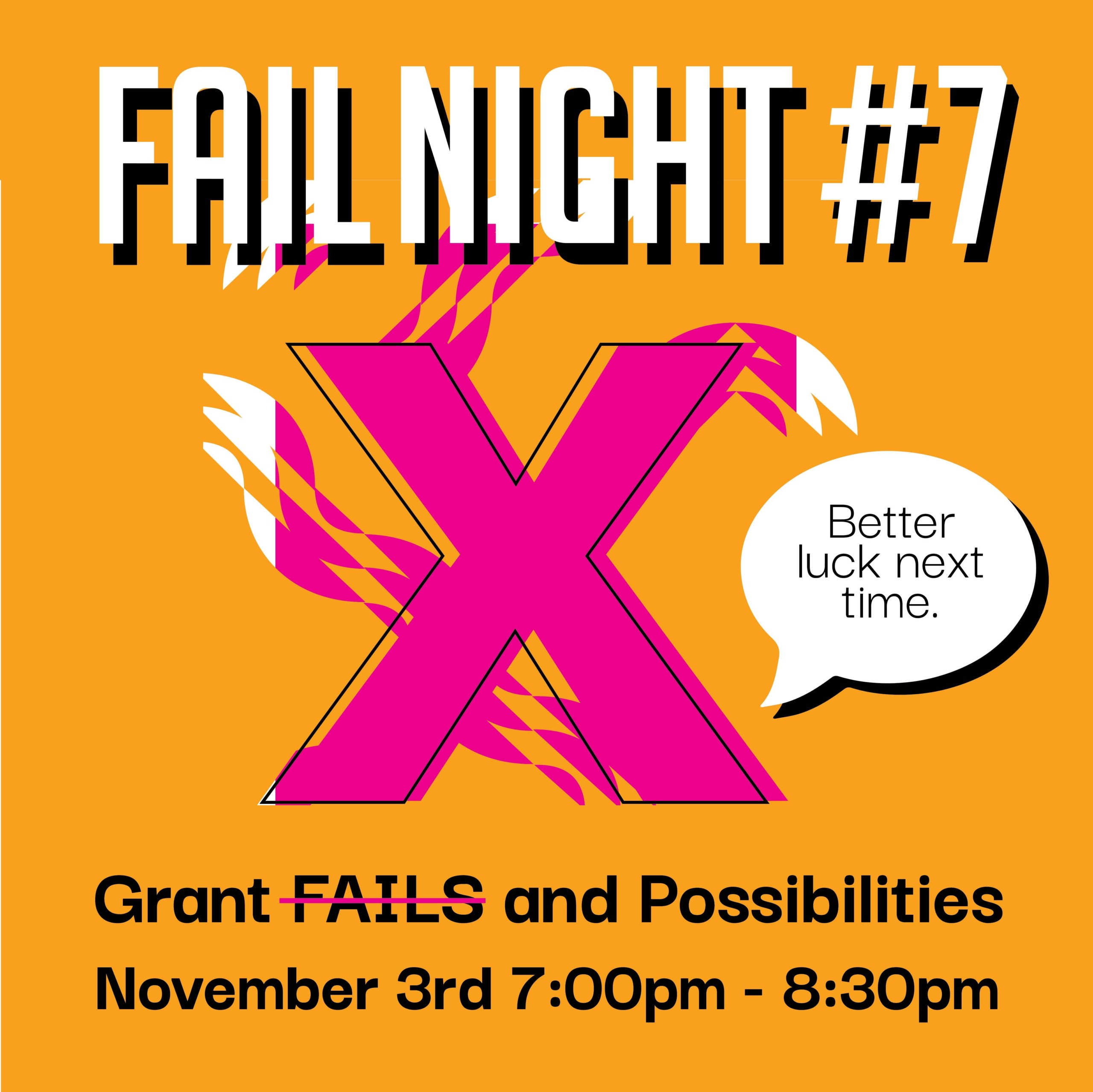 Join the 10C community for our 7th annual Fail Night – a fun and inspiring night where we share and laugh at our missteps, shake them off and find success in a community dialogue about failing.

This year’s theme is ‘Better Luck Next Time – Grant Writing Fails and Possibilities’ where our panelists will be asked questions about their experience stumbling through the grant writing process, sharing their insights, and connecting further to enhance our own grant writing and collaborative grant writing skills. Working towards future and shared successes.

As always, the panel discussion will be followed by an ‘open mic’ about grant failure and new possibilities for collaborations.

Scott McGovern is a curator, artist, video maker, and educator. He studied video at the Ontario College of Art and Design. Since 2005 he has been the program director at Ed Video Media Arts Centre, an artist run centre in Guelph, Canada, where he has facilitated over 150 exhibitions, events, and concerts. Since 2010, he has been the Visual and Media Art Curator of Kazoo! Fest. He has curated exhibitions at artist run centres, public galleries, and art fairs in Canada, USA, Mexico, England, France, Sweden, Finland, Spain, and Greece.

Before Silence, Scarlett earned her MA in Art History with a Graduate Diploma in Curatorial Practices in Visual Culture through York University and received her BA in Philosophy and Museum studies at the University of Guelph. Scarlett’s passion for community organizing and grassroots arts administration has led her through positions such as Front of House Manager at the Blyth Festival Theatre, Local Affairs Commissioner at the University of Guelph Central Student Association, Festival Director of the Huronsound Music and Arts Festival, and Board Member at Blyth 14/19 (now the Canadian Centre for Rural Creativity). During her 3 years at Silence, Scarlett is proud to have had her hand in securing over $150,000 in project and operating grants while directing as much money into the hands of artists as possible.

Michelle Peek is an artist facilitator, community-engaged educator, and photographer. As Founder and Executive Director of Art Not Shame, she is interested in the transformative role of art-based community-making in social justice projects and mental wellbeing. These commitments are reflected in Art Not Shame’s deep purpose to use the arts to be in community, deepen access to creativity, increase well-being, and create the conditions for inner and outer change. Michelle holds a PhD in English and Cultural Studies from McMaster University where she studied and has published on love and belonging in contemporary queer, Indigenous, and human rights literature.

Scott Thomson is a trombonist and composer based in Montreal. His songs on texts by others for singer and dance artist, Susanna Hood, have been played in many contexts, some involving her choreography. His work as a soloist, with Monicker (with Arthur Bull and Roger Turner), and his recent disc Pal o’Alto (duos with Yves Charuest, Jean Derome, Karen Ng, and John Oswald) show Scott’s ongoing commitment to open improvisation. He co-founded and co-directed the Association of Improvising Musicians Toronto 2004-09, and co-directed the AIMToronto Orchestra, formed for a project with Anthony Braxton in 2007. In 2016, he convened the Montreal-Toronto Art Orchestra to work with Roscoe Mitchell. Scott founded Somewhere There, a Toronto venue that hosted 850 concerts during his tenure, 2007-10. He has made site-specific works for mobile musicians and audiences in unconventional contexts including, notably, the National Gallery of Canada and the Art Gallery of Ontario. Scott programs the Guelph Jazz Festival with Karen Ng.

Vanessa Hyland is a 2008 graduate of the University of Guelph’s School of Environmental Design and Rural Development with a M.Sc. in Capacity Development and Extension – a program focused on communication for social and environmental change. Since 2009 she’s volunteered with several local grassroots organizations and experienced first-hand the fundraising challenges. She’s currently employed to fundraise for Ignatius Jesuit Centre.