When European settlers came to Turtle Island and began marrying the First Peoples here, an entirely unique nation was born. The children of these first marriages had to uncover their own place in this world. It was a complicated task, to balance the almost oppositional heritages passed down to them, and then to pass their distinct new culture down to their own children.

Navigating the territory between the old ways of Indigenous ancestors and the new ideas of the European immigrants was by no means easy. At times, attempts at forging an identity in the country were a brutal endeavour. Villages were burned down, leaders were hanged, battles were waged, and children were snatched away to residential schools. Despite repeated attempts to stifle the emerging culture, the young people proved resilient. But still, it is difficult to build a brand new culture, especially in the face of such resistance.

And so we, the Métis, beaded ourselves into the fabric of Canada’s history.

At this point, many Indigenous women were decorating clothing and items with dyed porcupine quills, which mostly limited them to making geometric shapes and designs. However, Métis children learned from the Grey Nuns (soeurs grises) how to do French silk embroidery, which emphasized the delicate floral patterns that were very popular in Europe.

A purple quillwork and beadwork flower by 4 Sisters Métis Beadwork.

The Métis combined this new design knowledge with the traditional quillwork used in the communities of the First Peoples. From this blend, the distinctive Métis beadwork style emerged. They would use coloured seed beads to create vibrant, textured images of flowers, which stood out from the styles that had existed prior. Thus, the Métis became known as “the flower beadwork people.”

This beading style exploded in popularity and demand in North America and Europe was high. Unfortunately, consumers wanted the experience of buying from a “real Indian,” so Métis artists were forced to sell their work to First Nations or Inuit traders, who would then resell them to the Europeans. As a result, Métis beadwork was often credited to other Indigenous groups such as the Cree or Ojibwe. Still, it is claimed that the Métis introduced this beading style to many Indigenous communities. The individual style of the artist was so unique, it is said, that one could identify the artist’s family by the flowers they beaded. 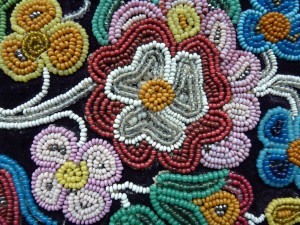 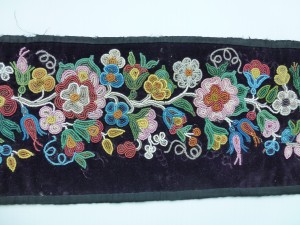 Do you know who made this? The Manitoba Museum is hoping to piece together the story of this beautiful work. Read their blog post >

Métis artisans would bead nearly everything they could get their hands on. Coats, leggings, moccasins, gloves, hats, medicine bags, dog blankets, and more would become colourfully decorated with tiny beads in intricate designs. A very popular piece that Métis men would carry was called a “fire bag,” or an “octopus bag.” This was a sack with several tasseled “legs” hanging from the bottom that carried a smoking pipe, tobacco, tinder, flint, and other essential items for fire keeping.

Modern Métis/Michif artists allow their beadwork art to evolve, just as their ancestors did. In the Canadian Museum for Human Rights in Winnipeg hangs a 7 metre long octopus bag crafted by Jennine Krauchi. The piece, featured in the museum’s Indigenous Perspectives gallery, remembers the loss of 9 road-allowance communities that were destroyed and celebrates the resilience of the Métis people despite these adversities. Throughout the piece are depictions of flowers with four petals and stems with four leaves. Four is a sacred number – four seasons, four integral parts of a plant, four sections of the medicine wheel. 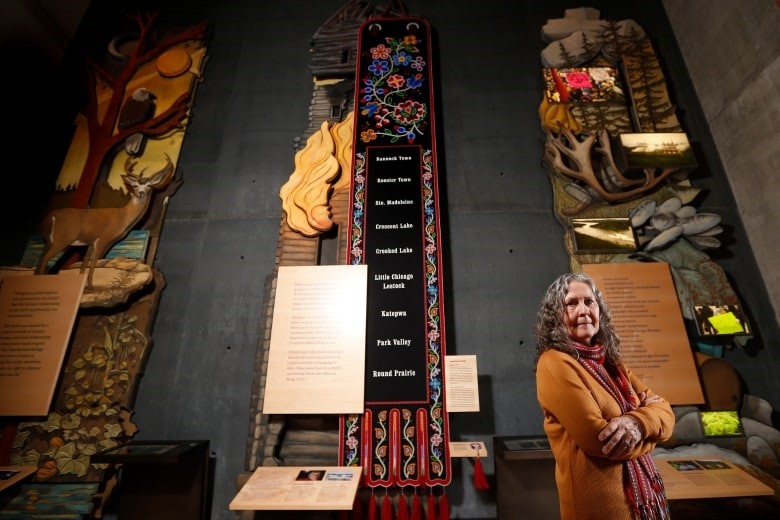 Christi Belcourt, who in 2015 was named the Aboriginal Arts Laureate by the Ontario Arts Council, used her knowledge of plants and Métis beadwork to develop a style unique to her. Belcourt uses paintbrushes or knitting needles dabbed in acrylic paints to dot on a typically dark canvas, imitating the appearance of beadwork. Her work has become so well-known that she has collaborated with fashion designers to bring attention to Métis art in the contemporary world. In 2017 the artist collaborated with Ela Handbags to create a collection for Holt Renfrew, with $10 from each sale going to the Onaman collective.

There were – and are – some common themes in the beaded artwork of Métis artists. The designs are often symmetrical, which also frequently occurs in other Indigenous art. Symmetry can represent balance and harmony, which can be especially significant to a Métis individual who is constantly reconciling two or more heritages. Symmetrical imagery of natural elements also speaks of equality and reconciled differences. This is an important conversation to have, and Indigenous artwork attempts to engage in this discussion.

Métis beadwork, similar to the work of other Indigenous artists, emphasizes interconnectedness among its parts. Flowers depicted in a piece are almost always joined by a stem, leaves, or petals. This can also be representative of nature and the world at large. All beings – even the rocks – are interconnected in one way or another. We must have a relationship with the land, water, animals, and plants around us. We depend on them just as much as they depend on us. We must also have a positive relationship with each other, as we are all of the same Earth.

Indigenous artwork brings forth important topics of equality, balance, harmony, and unity. Métis pieces are no exception. Art is culturally significant in that it effectively communicates a culture’s commonly-shared values with the “outside” world. Métis people may speak a different language than other groups, but Métis/Michif art has been shared with our Indigenous and non-Indigenous brothers and sisters since its conception in the hopes of fostering mutual respect, love, and admiration.