Behind the Curtain with CCP

Meet Curtain Call Productions, a university club older than its university, a theatre company whose members are mostly science majors, and an incredibly talented and resourceful bunch of young adults putting on fabulous productions every spring.

Who are these people, and how, with little to no professional training, do they manage to pull off an ambitious and quality show each year? I went behind the scenes with Curtain Call Productions on the night of their dress rehearsal for Legally Blonde: The Musical to find out.

CCP, as its members refer to the club, has been around since the 1950s, before the local postsecondary institutes joined to become the University of Guelph. Some of their members even have parents who met in the club when they were in their youth. The cast, crew, board and band made up over 50 contributing individuals this year. Mostly students with some outside community members, their backgrounds and training vary widely. What they all have in common is a passion or curiosity for theatre, and a willingness to work hard and bring all their tools and abilities to the table.

One secret behind their success seems to be how separate teams work with great focus on their own area, whether that’s marketing, set, sound, cast rehearsals, fundraising, etc. During this process, their more experienced club members liaise between groups to keep communication and logistics flowing and fitting. Finally, every individual commits to the end product, rising to challenges, weathering the inevitable conflict and chaos in order to make it all fit together and come to fruition by opening night. For many of the members I spoke to, witnessing the results of their colleagues’ hard work is one of the most rewarding elements of the production. It doesn’t just sound like hard work, but an awful lot of fun too. 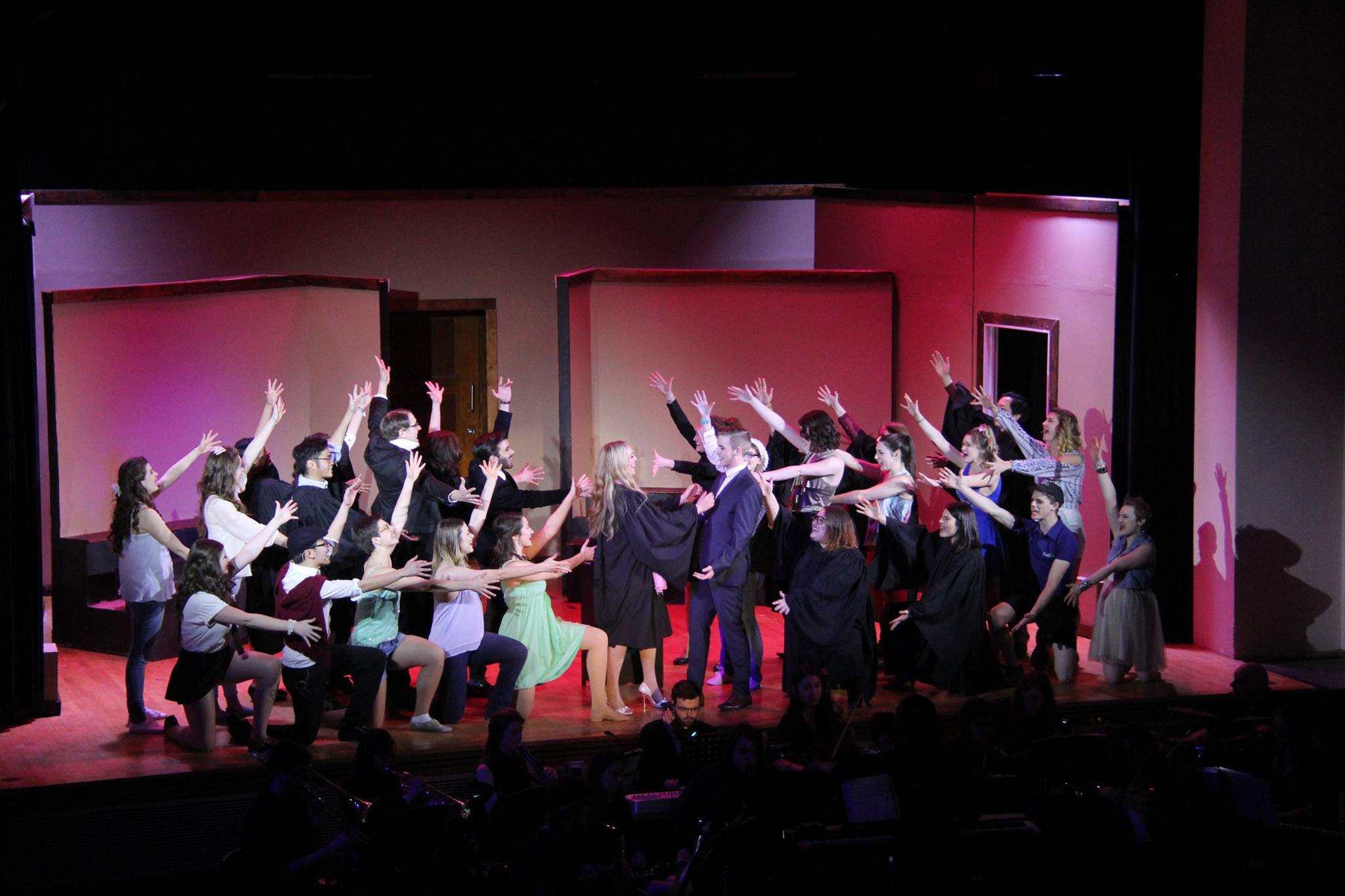 Nick Tiessen, Legally Blonde‘s male lead, has been involved in theatre since age six. For him, a biochemistry student, it’s not his career plan but he does consider it a passion. He describes the experience of the club as “…a way to cleanse the mind, if that makes sense. After a full day of class, just to come live a different life and be a different character, it’s a release.” When asked what he wished people knew about the theatre, he said “People think theatre is a scary niche, that you have to love or know the arts, but really it’s for everyone.” He grew up in a sports-loving family, and used to play hockey as well. His parents were supportive of his involvement in both sports and theatre. While I talked with him, someone was seriously and efficiently taping a small microphone to his face.

Next I sat down with Cara Humeniuk, who played the lead role of Elle. She’s in her third year of Adult Development, an applied science program focusing on health and well-being from young adulthood to old age. A long-time rugby player, she is still new to acting and this is her first play since high school, although she had tried out several years earlier. Three focused crew and board members bustled around her, applying makeup and adjusting hair while she related the story of her previous attempt to join Curtain Call. It was in her first year of university that she found herself in tears after having received a callback from the club. She was unable to make it in time because she was away at a rugby tournament. She laughed as she told me this, trying hard to hold still for her colleagues. Cara can tell you that it’s hard to fit in all the great things you’d like to do while in university. 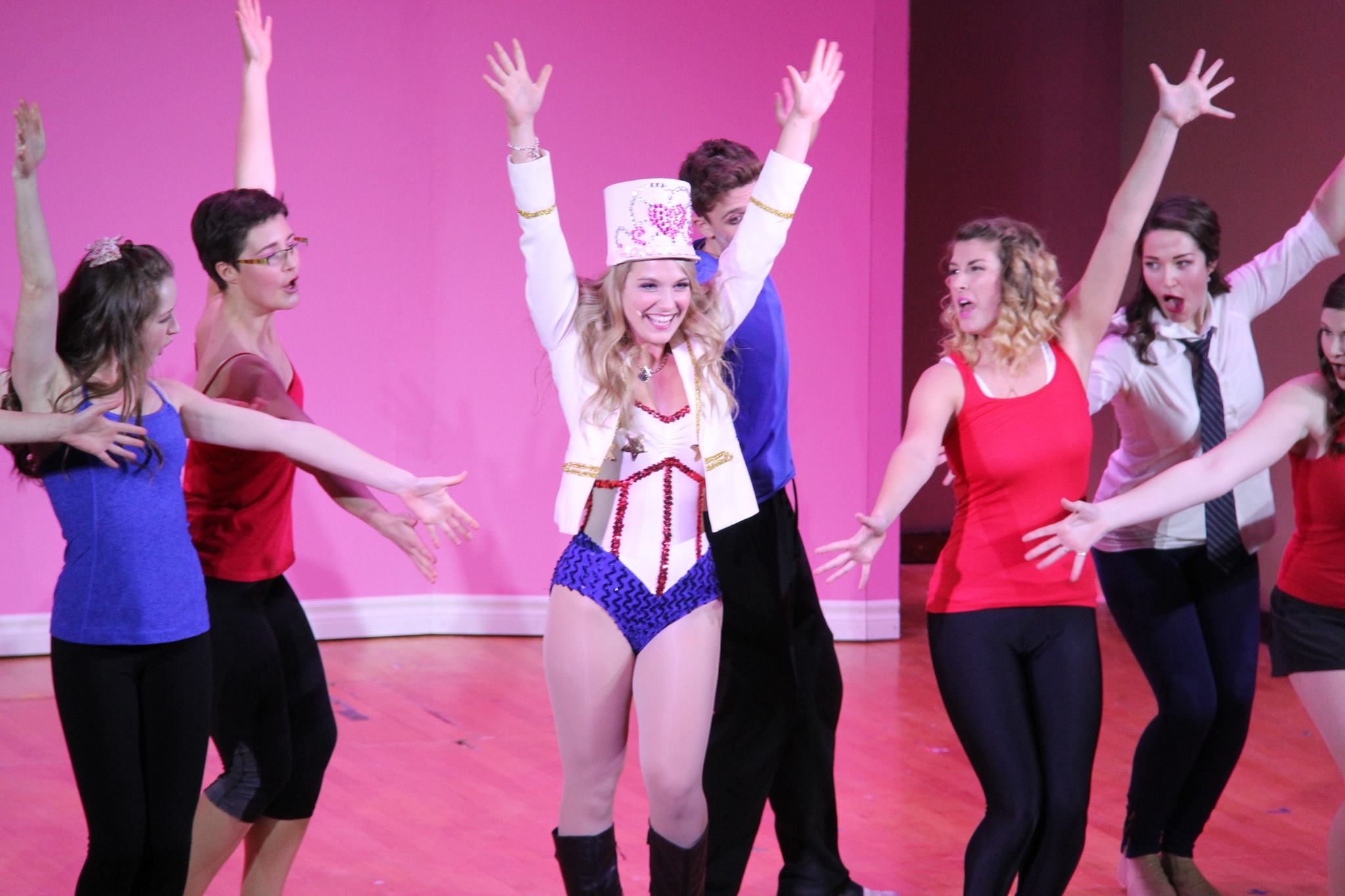 On the other hand, something I heard from cast and crew members alike, was about the balance that the theatre brought to their lives. The assumption might be that adding more to your plate when you already have school, work, and other responsibilities to juggle is foolish and a recipe for failure. But board and cast member Karson Thériault, for example, says that her grades actually went up when she joined Curtain Call, along with her mental health. We chat quickly before she’s called up for dress rehearsal, and this bubbly young woman in a cheerleader costume tells me she’s working on her Masters degree in neuroscience, researching the cellular and molecular mechanisms of cocaine addiction. Thériault says that everyone in the production gets their schedules ahead of time, and the addition of rehearsals and planning meetings to schoolwork removes the ability to procrastinate. “There’s your schoolwork time but that’s all you have, because you’ve got to get over to rehearsal at five o’clock, so better get it done! Plus, the theatre is the breather you can look forward to.” There are also social and physical components that boost her mood, such as the exercise of dancing. There was even pet therapy at the Legally Blonde rehearsals, since live dogs starred in the show. 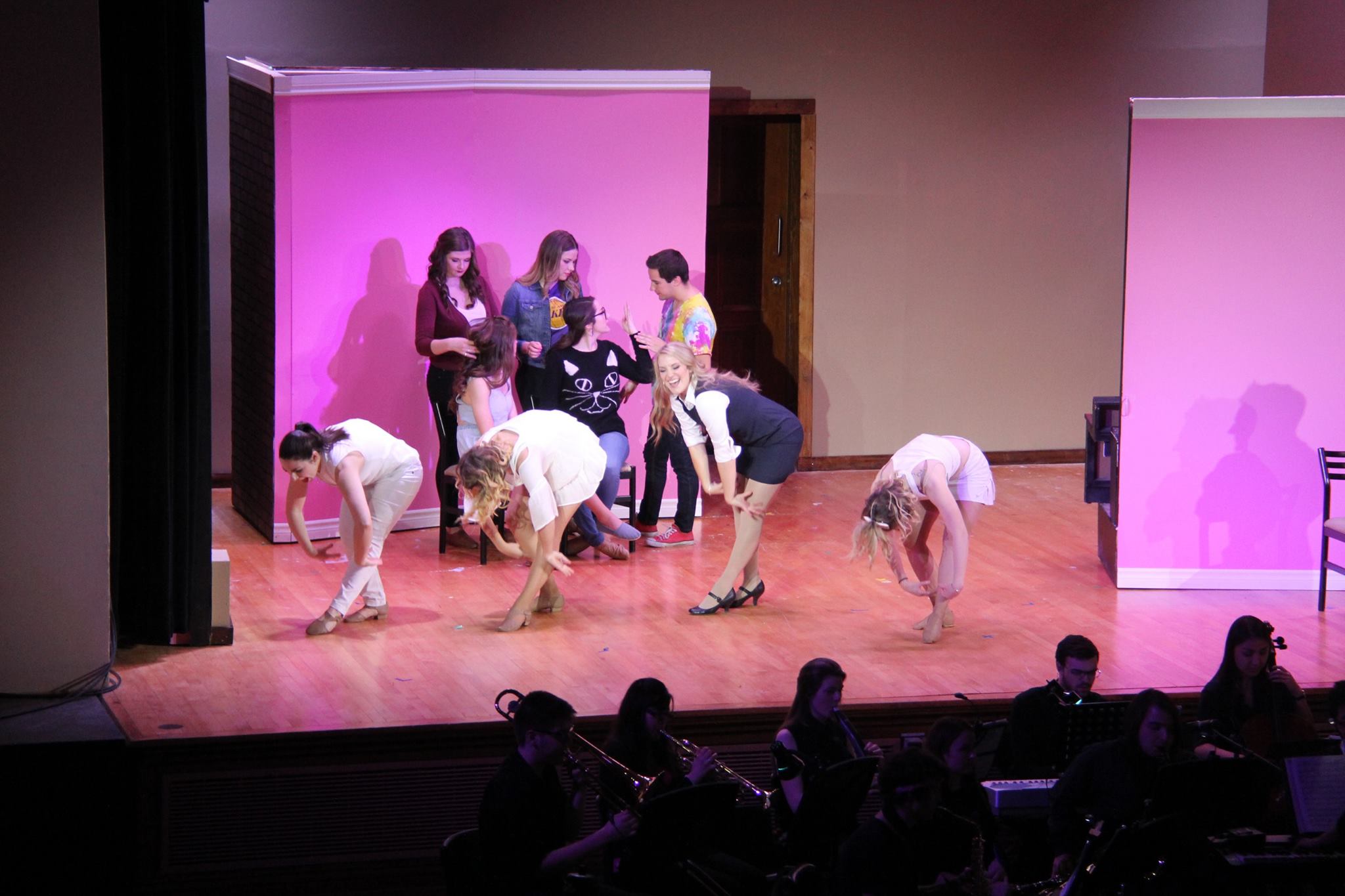 The mood backstage, or rather, below stage in the basement of War Memorial Hall, CCP’s performance home on campus, was a tapestry of emotion and activity. In the one large open room, there was quiet laughter mixed with muttered lines, focused expressions, practiced dance moves, occasionally interspersed by hollered announcements and requests from the people with the best vocal projection of all – the stage manager and her assistants. An overtired musician snuck in a nap while board members made pom-poms and prepared door prizes for opening night. Cast members disappeared behind racks of clothes and emerged as characters. It seemed there were a hundred people moving about – cast, crew, band and board playing their parts as they have since day one of the season, excited to finally see it all come together on stage. 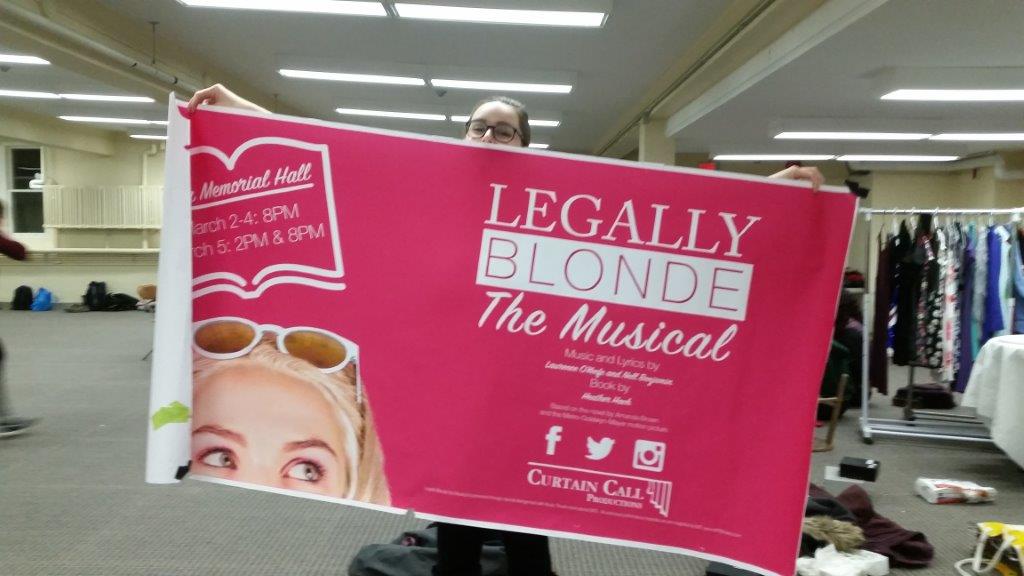 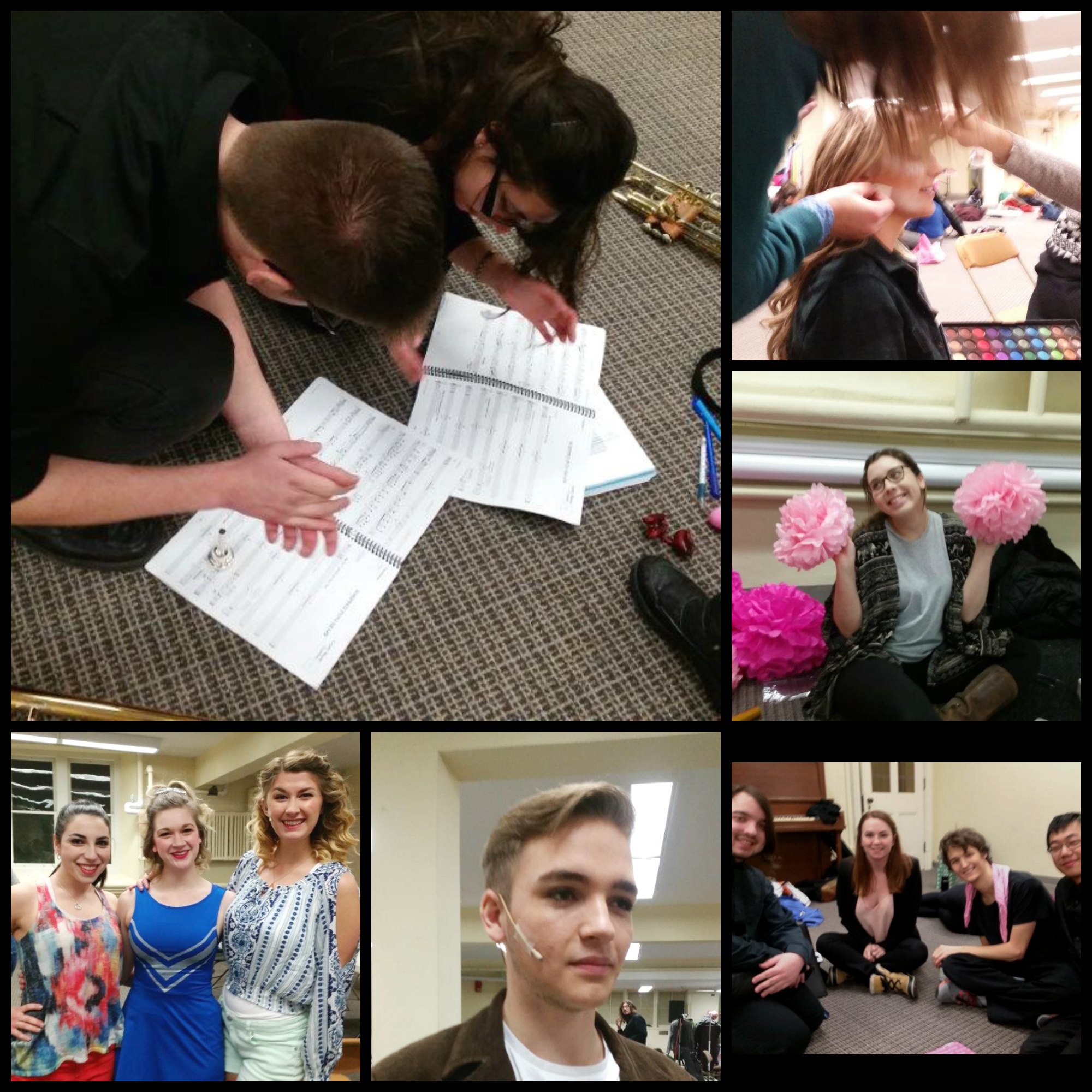 Legally Blonde: The Musical attracted an enormous crowd of dedicated community supporters and students, as well as some new and curious faces. Congratulations to Curtain Call Productions on another successful show, and on keeping this important theatre staple alive and well in Guelph!

Thank you to everyone who took the time to share your experiences and perspectives with us during your busiest time. Special thanks to Jordyn Posluns, Brianne Stevens and Domonic Rao for being gracious hosts and tour guides.

Want to follow CCP’s next production? Check back to http://www.uoguelph.ca/~curtain/upcomingshow.html

For more on the play itself, check out this article from the Ontarion http://www.theontarion.com/2016/03/curtain-call-productions-presents-legally-blonde-the-musical/