Doors Open: A Day (and Night) of History, Art and Community

On Saturday, April 21, 2018, visitors and locals alike will take in guided tours at Doors Open Guelph during the day, and roam the Guelph Civic Museum at night. Guelph Arts Council is still seeking volunteers (who get to skip the line!) for Doors Open Guelph, and Guelph Museums is seeking artists and historians to activate Doors Open After Dark.

Visitors enjoy a tour of the Hammond Radio Museum in 2016. Photo by Rukhsar Jaffer.

On average, Doors Open Guelph attracts 6,000 people to its sites each year, 25-50% of whom are visitors to the city. Last year the event attracted a record 8,000 visits to 15 sites. Since its inception, Doors Open Guelph has been part of Doors Open Ontario, an Ontario Heritage Foundation initiative that was also launched in 2002 to celebrate community heritage. Guelph’s event has had the distinction of being the kick-off event for Doors Open Ontario, opening the province-wide initiative for several years.

This year Guelph Arts Council is pleased to announce a collaboration with Guelph Museum’s Doors Open After Dark, the Museum’s second annual history-at-night party. After a day exploring Guelph’s hidden gems, Doors Open visitors are encouraged to save some energy to celebrate Guelph’s 191st birthday with pop-up art and history installations at and around the museum. The free fun begins at 9 pm. Artists and historians can watch for a Call to Artists to be released by March 9. For more information about Doors Open After Dark, visit guelphmuseums.ca.

Doors Open Guelph’s success is due to the enthusiasm and hard work of volunteers who serve as site captains, tour guides, sweeps, greeters, counters, researchers, and more. Join us as a volunteer and help make Doors Open Guelph a true community celebration. If you’re interested in lending a hand please fill out a volunteer signup form or contact Katie Wilde at [email protected] or 519-836-3280. 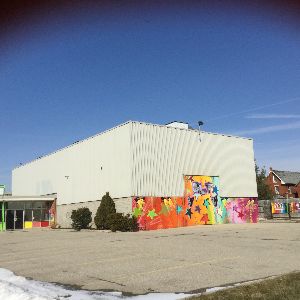 In 1935, the first Little Theatre opened at Guelph City Hall. A fire in 1993 forced it from its 26-year home in the Salvation Army Hall on Dublin Street. In 1997, it moved into a former welding shop. The space holds a 288-seat raked auditorium, large raised stage, gracious lobby, rehearsal hall, workshop, dressing rooms, and storage areas. The tour will take visitors to the stage set for its current production. Family-friendly activities include a costume photo booth, prop-making demonstration, and sneak peeks at a rehearsal and performance. 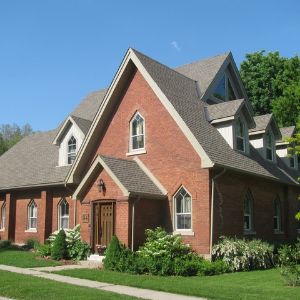 In 1899, Knox Presbyterian Church established a Sabbath School Mission in the Ward. In 1909, St. Paul’s Presbyterian Church was constructed as a modest Edwardian building with Gothic windows and an impressive Douglas Fir ceiling. In 2002, the church was sold and renovated over five years into a spectacular residence. It is also the home of Sage Solutions, a strategy and facilitation company. 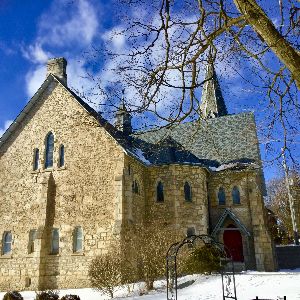 Built in 1891-92 in Gothic style, St. James is the newest of Guelph’s stone churches, the last built with local limestone. The church was downsized from its original traditional plan resulting in an unusual orientation. The nave was eliminated leaving the north transept as the nave. The original fine wood ceiling and elaborate vaulting remained in the building’s final form. 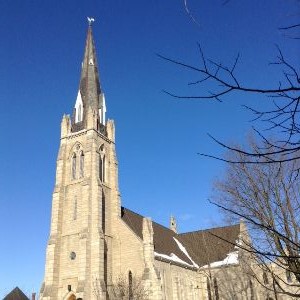 The original Church was built in the market grounds in 1832, but was demolished to make room for Guelph’s City Hall. The new Gothic Revival church built in 1856 was designed by William Hay of Toronto. The open timberwork ceiling and fine stained glass windows memorialize church leaders and a plaque pays tribute to John McCrae who attended the church in his youth. The south-side addition is built of stone salvaged from Guelph’s demolished Opera House.

55 Delhi Street
The Forsyth-Hepburn Home was constructed in 1910 of red brick in Georgian Revival style as a residence for nurses working at Guelph General Hospital. It served that purpose until the late 1950s. Vesterra Property Management acquired it in 2013 and renovated it retaining all original exterior wood trim, bay windows, front porch with Tuscan columns, and the interior staircase. 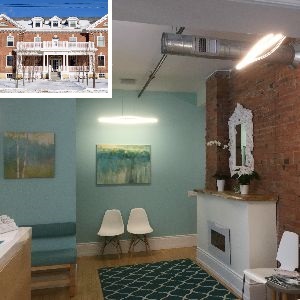 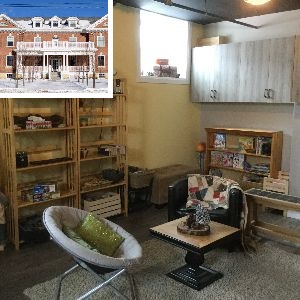 55 Delhi St. – First Steps
In the lower level is an after-school child care service that fills its four bright rooms with activity. The lower red brick walls have been restored to give children a lesson on our city’s heritage. 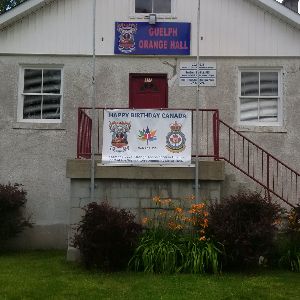 The Loyal Orange Association of British America has had a continuous presence in the City of Guelph since 1837, having a total of seven different Loyal Orange Lodges and three Ladies Orange Benevolent Associations. Prince Arthur L.O.L. 1331 was first established in Guelph in 1871, but moved into its present building in the late 1940s. Displays will demonstrate various aspects of its history and community involvement. 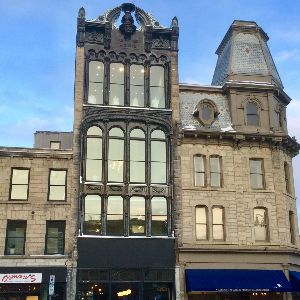 The New Petrie incorporates the remaining pieces of the former Western Hotel built on the site in 1847. Partly destroyed by a fire in 1854, the Petrie could be one of the oldest buildings left on Wyndham Street North. Its back wall and portions of the former stables are preserved in the offices of Hunch Manifest and The Robbie Group. Designed in 1882 by Guelph architect John Day, the building opened as a pharmacy for Alexander Bain Petrie with a unique stamped metal facade and iconic mortar and pestle. Since 2015, it has been restored for several new businesses. 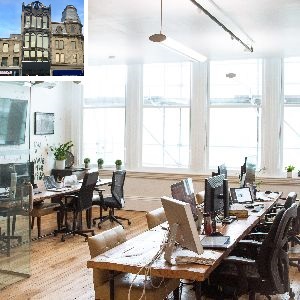 The New Petrie – Sway
Sway was founded in 2013 with a focus on becoming the best visual advertising agency via television commercials and online video. Sway is now an industry leader in brand management, marketing strategy, and unique content creation. 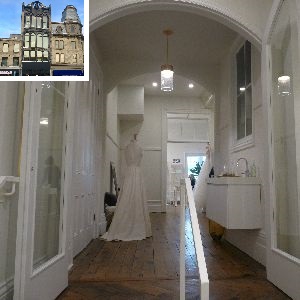 The New Petrie – The Modern Bride
Mr. Petrie wanted the tallest building on Wyndham Street, so he topped it with an empty shell that remained unused for 136 years until it was restored as an elegant showroom and stunning event space for The Modern Bride. Twenty-foot ceilings and eleven-foot windows looking on the Basilica create a beautiful backdrop for the wedding dresses. The Modern Bride is a carefully curated, appointment-only bridal boutique that offers a unique shopping experience for the contemporary bride. 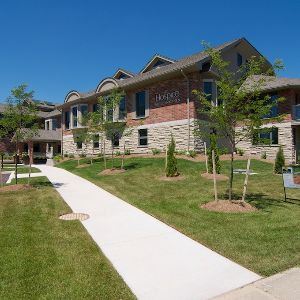 Founded in 1980, Hospice provides care and support to families facing a life-threatening illness. The former Kortright Presbyterian Church was built in 1983. In 2010, David McCauley, architect of the original church, redesigned the building with ten palliative residences in the upper level and community support programs in the lower level. The design includes a living wall, solar panels and rainwater collection system to support the pollination garden on the grounds. Visitors will experience collaborative art and family activities. 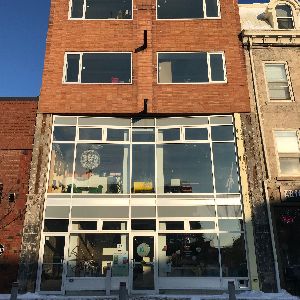 Seed Warehouse was a two-storey stone structure built in the 1860s which later became Massey-Ferguson Farm Supply. Between 1924 and 1934, Ackers Furniture moved in, added the top two floors and remained until 2016. In 1955, a fire caused a huge safe to fall through the first floor to the basement where it remains today. Together with the Chalmers Community Service Centre, the building is now a thriving collaborative workspace and community hub. 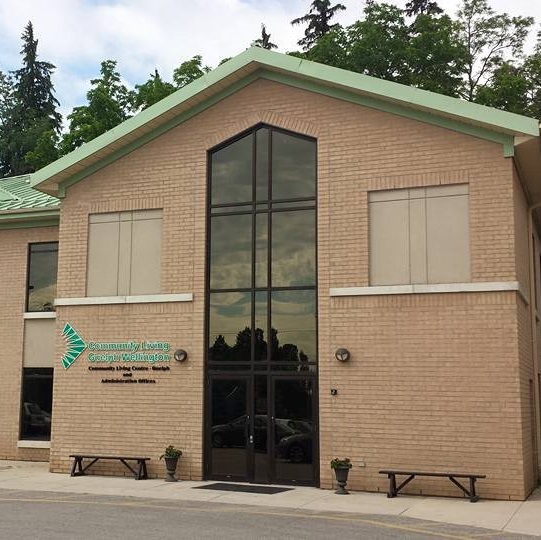 CLGW facilitates social inclusion and community engagement, supporting adults with developmental disabilities to have a full life, living, working and connecting in their community. Our vision to enrich, inspire and engage ensures we all belong and contribute as valued members. Tour CLGW, meet some of the 400+ people the organization supports and learn why Guelph is a caring community. 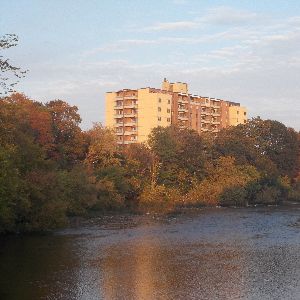 Trails Open – Speedvale Trail Underpass
Often in the news last year, the City’s upcoming trail underpass will complete a safe and scenic link above the riverbank between the TransCanada Trail, Riverside Park, and the Evergreen Seniors Centre. 15-20 minute hikes will be run throughout the day by the Guelph Hiking Trail Club. Parking off Riverview Drive, behind the Speedvale Ave. E. firehall.