Starting a theatre company isn’t easy. Along with a high tolerance for risk, you need multiple skill sets and a lot of hours, plus some money, a venue, and a willing audience. Yet four Guelph theatre junkies have pulled all that off with The Downtown Theatre Project. Since its launch in March 2018, they have produced five plays in the intimate space at The Making Box in downtown Guelph, selling out many shows. And apparently they’re all still friends.

So what’s the ticket? For one thing, the company has developed a reputation for edgy dramas that manage to make audiences not only laugh, but also squirm in their seats, and often cringe (in a good way) before emerging onto Cork Street a little dazed and amazed. The creepy crawly show “Bug” also left people obsessively itching, while the sold-out “5 Lesbians Eating A Quiche” had them rolling in the aisles while wearing nametags like “Doris” and “Beulah.” The company’s sixth show, “The Goat (or Who is Sylvia?)” by Pulitzer Prize-winner Edward Albee, runs July 17-21, and promises to provoke.

Also, all four producers bring lengthy theatre bios to the project. If you’re into theatre in Guelph you might have heard of Trevor Smith Diggins, Tim Clarke, or husband-and-wife duo Jen and Paul Barson. They all share producing duties, each has directed at least one of The DTP shows, and as of July three will have appeared on their stage.

Guelph Arts Council recently welcomed them as a member and wanted to know more. Catching them all in person would be like, um, herding goats, so we asked them a few questions by email. (Some answers have been edited for length.)

GAC: What was your biggest challenge in starting a new theatre company?

The DTP: The biggest challenges are always time and resources. It takes a community to produce a good show. We’ve been fortunate to draw a very supportive and talented community of artists to work with us. We launched in March 2018, but the idea was in development for about three years. Once we aligned with The Making Box, we knew we had a performance space and a deadline. Nothing inspires art like a deadline. So, we started reading scripts. And we made it to our first opening night. That went well, so we did it again. And now, it’s a year later, and we’re producing our sixth show.

How did you overcome those challenges?

It was financial risk for all of us. Until we started selling tickets, we weren’t sure if people would come. But they did, and they’re still coming. And we’re still reading scripts. We believed in the idea that there was a space in the entertainment scene downtown for intimate-space theatre.

What kind of response have you had from the Guelph community?

We are getting a very good response. We’re surprising people, and we’re building a very diverse audience in the process. Theatre is a very special and fragile thing, because it lives only in the moment. So it’s the opposite of watching Netflix because you can engage with a story in real time. Being in the room where it happens can be a very powerful experience.

You’ve sold out many performances from the start. What contributes to your success?

We’re getting to know our audience, and we’ve been able to bring some interesting projects to this intimate stage. We are trying to produce shows that poke some fun at the human experience, and sometimes that means tackling some edgier themes. We call it “theatre for grownups” because that’s our audience.

What are your criteria for choosing plays?

We focus on producing the kind of theatre that moves people. It’s sometimes funny, maybe provocative, and it might push the boundaries a bit. We look for projects that inspire, inform and provoke conversations. Though some are lesser-known plays, most are Tony-award or Obie-award winning scripts.

Why should someone attend a DTP show?

This is a very different kind of theatre experience. It’s intimate, which means small, and very chill. It’s theatre, but with a club-style vibe and some really talented local artists there to entertain you. Or maybe blow you away. And there’s a bar.

Tell us about “The Goat”

“The Goat (or Who is Sylvia?)” is a controversial comedy-tragedy mash-up by provocateur playwright Edward Albee. It may be the most famous play we’ve produced so far. It’s very funny, if you like your humour on the darker side. It’s also brilliantly written, and yes a bit shocking. “The Goat” won the 2002 Tony Award for Best Play; the 2002 Drama Desk Award for Outstanding Play, and it was a finalist for the 2003 Pulitzer Prize for Drama. It’s the story of a very famous architect who took a wrong turn on a country road one day. What happened will change his family forever. Albee shatters the boundaries of our taboos and offers a glimpse of the beast within us. And then we laugh. 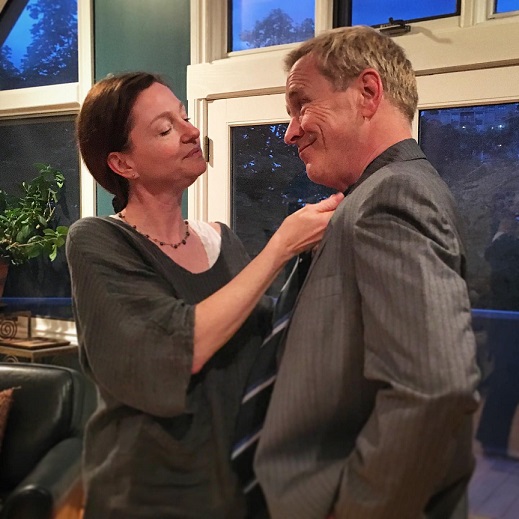 Jen Barson and Trevor Smith Diggins in rehearsals for their upcoming play The Goat.

How do you juggle the workload among four producer/actor/directors who also have other lives? (We suspect clones.)

Clones are a very good idea. Yes, it’s hard work, but we love it. And we’re fortunate to have so many other visual and performing artists in the community who want to work with us. We just like playing together and creating something that we hope people will enjoy.

Besides drawing on your own talents, how do you find actors? Are they paid?

We have held open auditions for most of the roles in our shows, and these calls are announced on social media. Our focus has been local, and we have used as many local artists as possible, including several Guelph-based actors. We respect artists and believe they should be rewarded for their work. Everyone shares in the success of each show on a profit-share basis. During our first year, we were able to provide all our artists and crew with honoraria.

What is your dream for The DTP?

Theatre is a passion we all share, so our dream is to continue doing it. We’re really encouraged with the response so far. So I guess Guelph is ready for this brand of edgy, off-stream entertainment…. Okay, if we’re dreaming, then we’d love to have a big corporate sponsor, so we could produce more theatre and support more local artists in this community. So, our dream is just to make more people happy.

(And maybe make them squirm a little.)