Humans are Intrinsically Storytellers, the Pandemic Hasn’t Changed That

By Nathan Lawr, Operations Director at the Guelph Film Festival

When the pandemic first hit, almost everything was shrouded in a cloud of uncertainty. It was hard to plan anything, let alone a film festival. For the performing arts, one thing seemed pretty certain: things were going to be very different for a long time. We witnessed a seemingly endless stream of heartbreaking decisions as our friends at some of Guelph’s other festivals were forced to cancel or postpone indefinitely. Most of the ways we connect as a community were disappearing. If we can’t gather together, it’s harder to make those lasting connections we need to feel like we belong here, like we belong to this community.

A father and daughter enjoy one of the Pocket Series shorts at The Common coffee shop during the 2019 GFF. Photos by Richelle Forsey

As a film festival, we’re relatively lucky. Watching a film is not something that necessarily has to happen in a room with other people (although it’s much more fun that way). It’s one of the easiest art forms to appreciate at home. We realized pretty quickly that we wouldn’t be able to present our festival like usual. An in-person festival was just not practical. So, like many other film festivals, we made the decision to move our festival online.

This city is full of creative, forward-thinking people, willing to listen and consider others. This willingness to listen, to hear the stories of others, is a crucial part of making our world a better place. Humans are intrinsically storytellers. We learn about ourselves and our world through stories. The pandemic hasn’t changed that. This is why we were determined to present a program, like we do every year, that gives the voices of marginalized and oppressed people a platform and audience. From November 6th at 4:00pm to November 14th at Midnight, we will be presenting an amazing line-up of documentary films that embody and explore our commitment to social justice, our environment, and community building. We believe documentary film can be a catalyst for conversations about change in a time of crisis, as well as being an opportunity to learn and uplift. 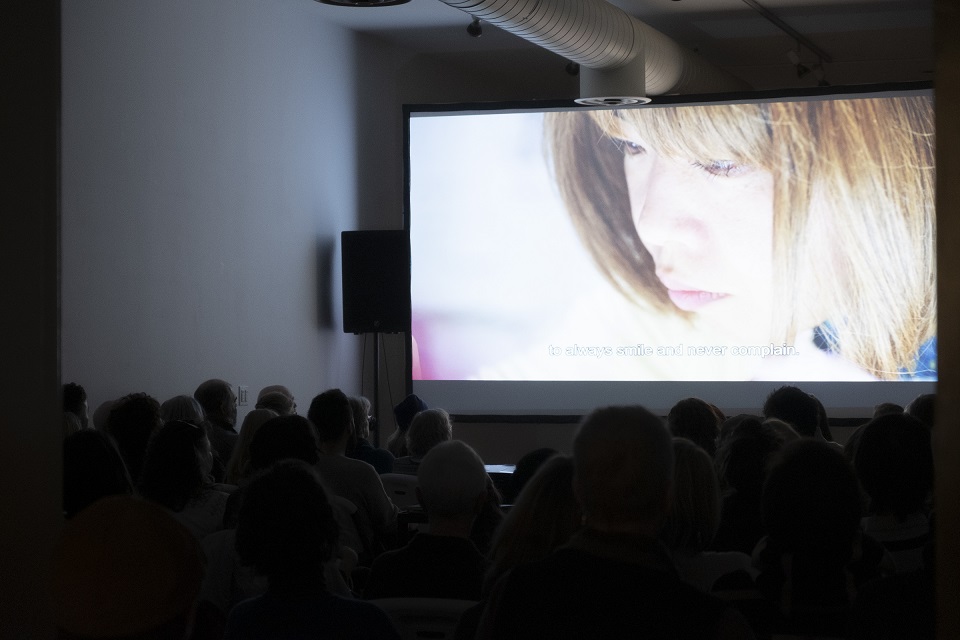 Audience members take in #FemalePleasure at the Boarding House Arts Gallery space during the 2019 GFF. Photos by Richelle Forsey

We’re proud to present films like The Dilemma of Desire, which explores the work of four women who are shattering myths and lies about female sexual desire, bodies and – ultimately – power; Coded Bias, which follows the fallout of MIT Media Lab researcher Joy Buolamwini’s startling discovery that most facial recognition software is biased and does not see dark-skinned faces or women with accuracy; and Mni Wiconi: Mitakuyelo, which tells the story of five Indigenous Water Protectors who reunite in Toronto after meeting at the Oceti Sakowin camp during the NoDAPL resistance movement at Standing Rock. Not to mention our special Tiny Food Docs by Tiny Food People, a collaboration with Our Food Future Guelph-Wellington, a series of kid-made, food-themed documentaries. These, along with a groundbreaking line-up of Indigenous-made shorts, exclusive feature length and short documentaries, entertaining kids’ programming, exciting community partnerships, and dynamic panel discussions means that our 2020 festival will be one to remember.

Each pass, offered on a sliding scale from $35 to $75 ($150 value), will give you On-Demand access to all the films for the duration of the festival. You will also have access to our 3 exclusive live streaming events featuring panel discussions with exciting guests from around the world delving into the social and environmental justice issues highlighted by the films.

The Guelph Film Festival Online 2020 On-Demand platform will look and feel very much like any other online film-watching platform (such as Netflix or Crave).

For more information, head to www.guelphfilmfestival.ca/passes