I recently had the opportunity to visit the studio of one of our artist members. Besides being introduced to possibly the friendliest studio cat in existence (‘Kotek’, Polish for ‘cat’), it was a chance to be introduced to the creative space of a sensitive, serious and generous local artist.

Grazyna Adamska-Jarecka is a figurative, abstract and landscape painter – often all at once. Her abstraction is expressive, her use of pattern linked to social and personal histories. Throughout all her work runs a vein of a deeply vulnerable self-exploration.

The artist in her studio, working on Red Migration. (Image courtesy of the artist)

She was in the middle of painting when I arrived at her glass-doored garage studio. After I tapped gently on the glass and waved hello, she welcomed me inside with tea and toasted pecans. We talked about what she is working on, and how where she came from led to where she is now. 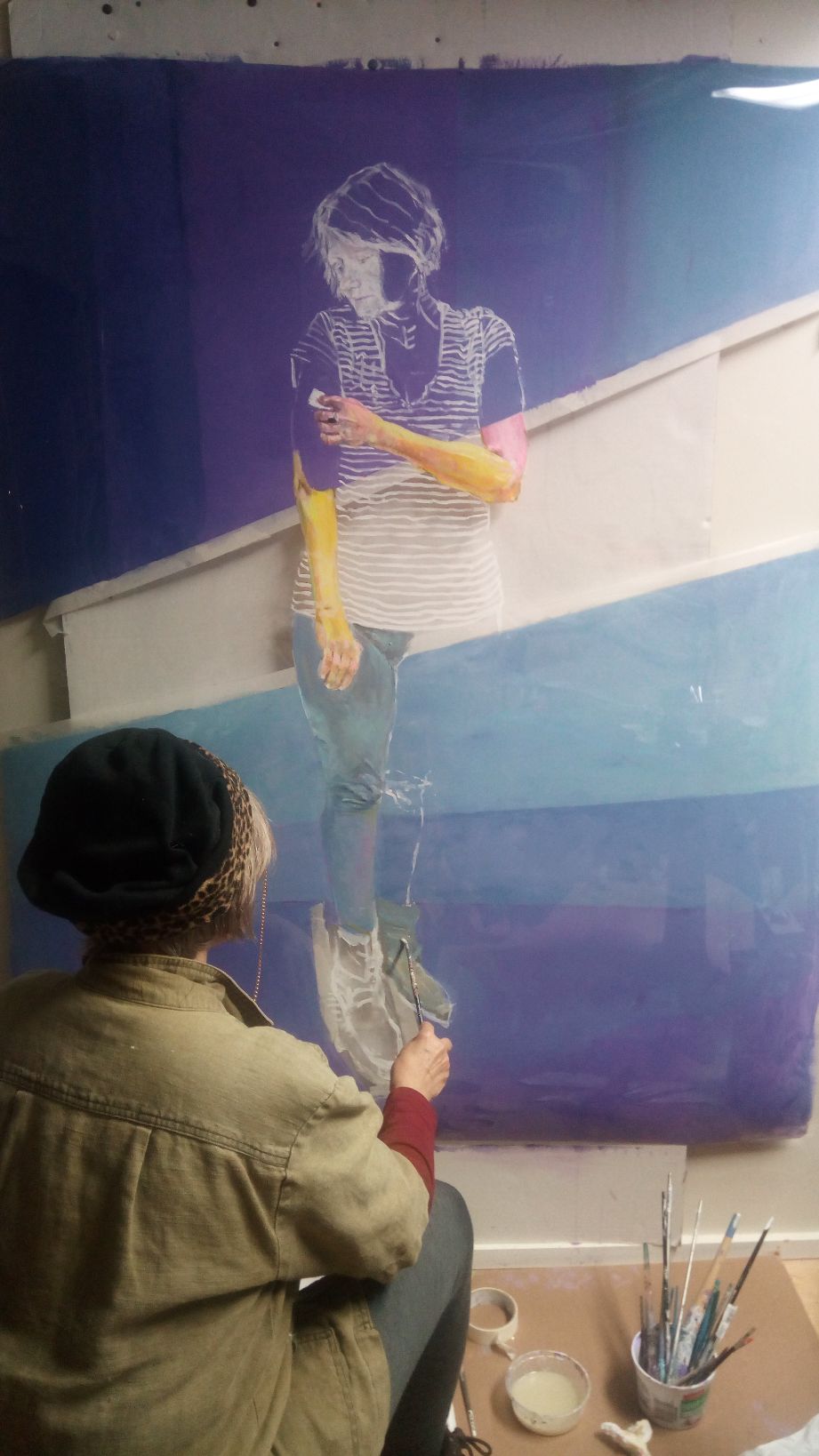 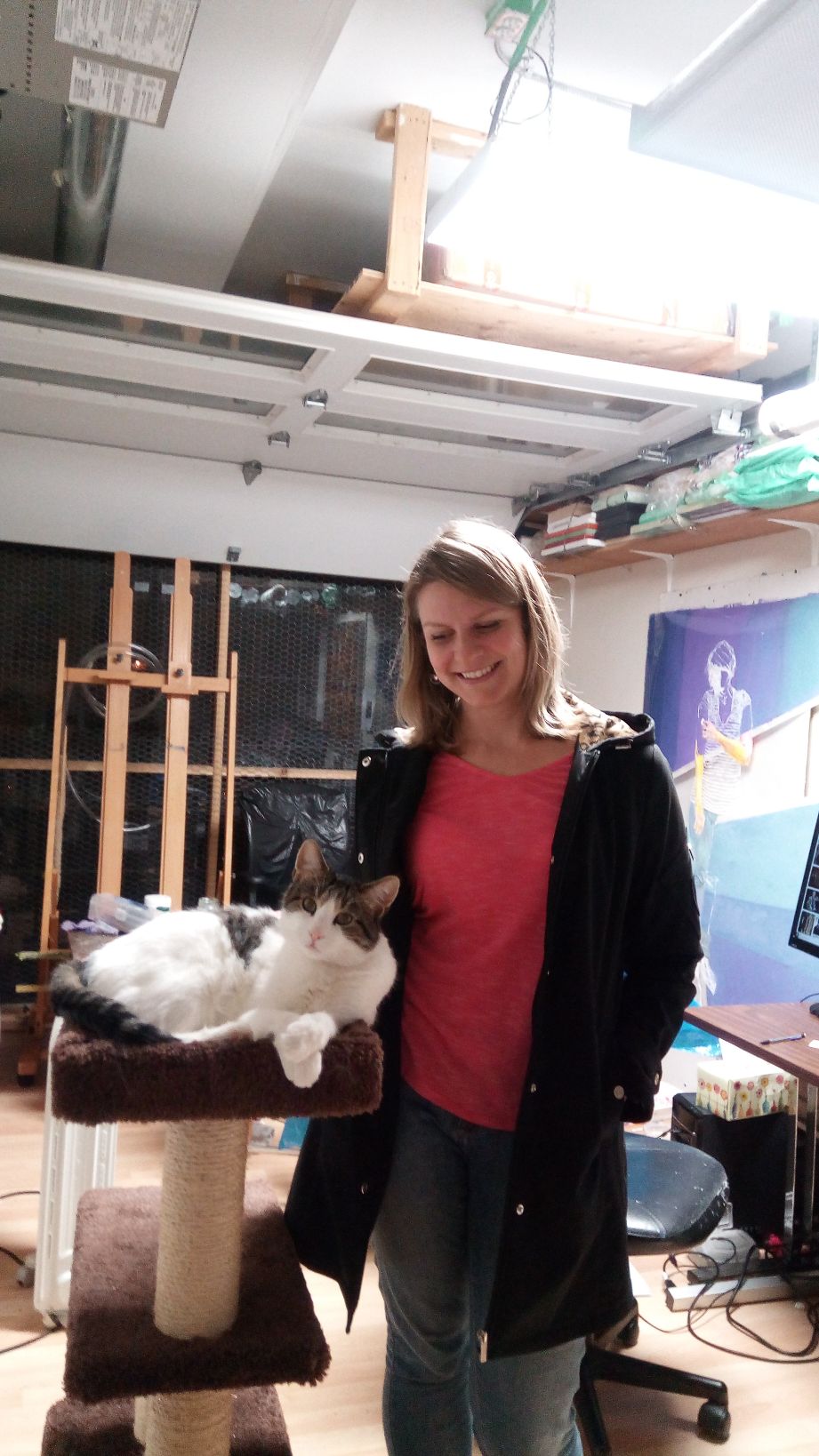 Grazyna at work in her studio the evening of my visit (left), and me, enjoying new art and a new friend (right).  Grazyna tells me later his real name is Eben, but they call him Kotek to avoid confusion with another (human) Eben in the house. (Images courtesy of the artist.)


What’s this? (I pointed to the piece she was painting when I interrupted) I recognize it from the progress pictures you shared on Instagram recently – but I hadn’t realized it was on plastic film when I saw the photo.
This is for an upcoming show at the Minarovich Gallery in Elora – Finding the Nest; Self-Identity and Otherness. It is about how I integrate into a culture while trying to find a nest and not to be marginalized. As a working title, the painting is called Oddness, and the plastic surface is called Lexan.

This is a self-portrait – what are you holding on your arm?
It is a cotton pad, from after a vaccine. It is like I have given myself a shot against isolation. 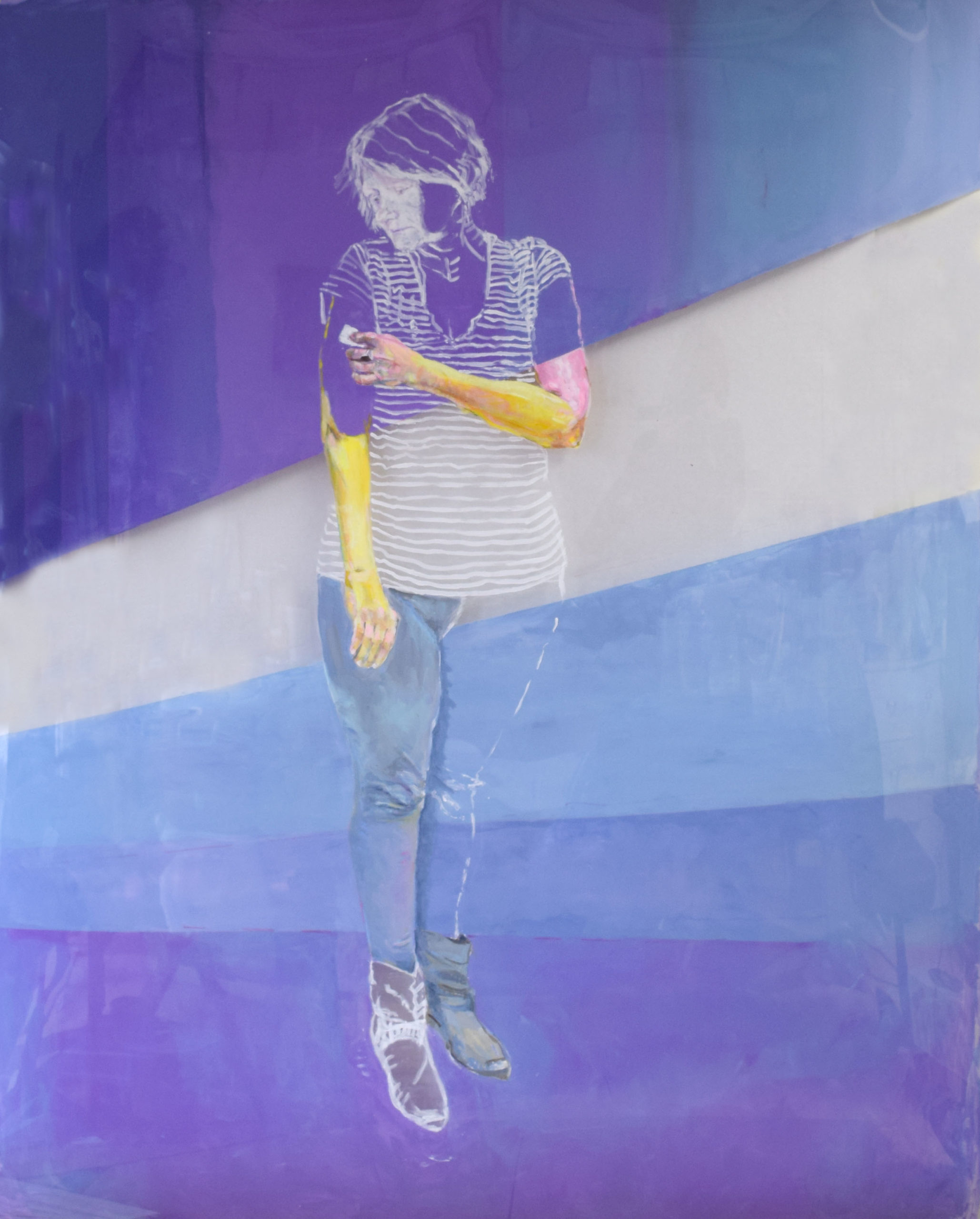 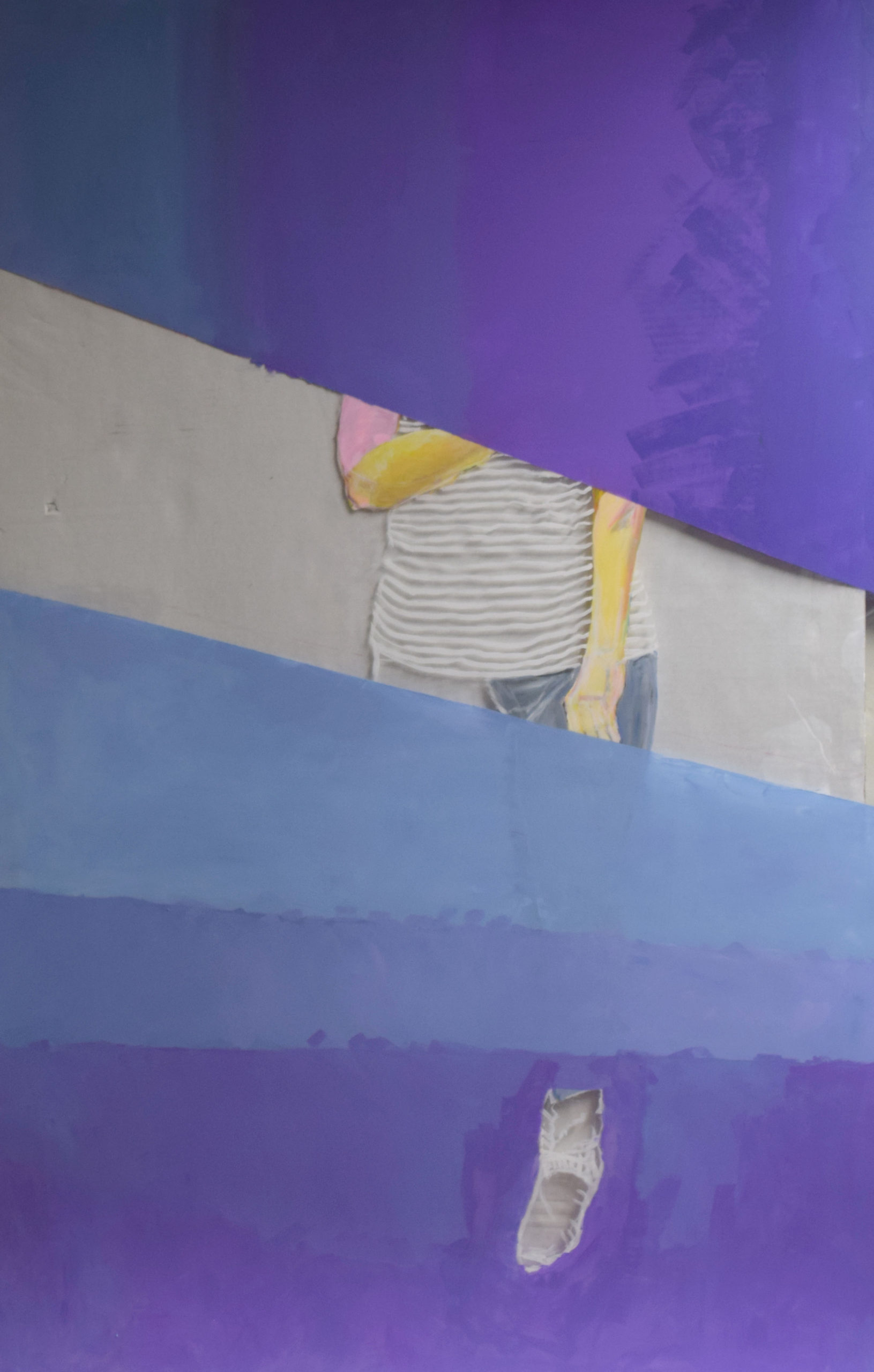 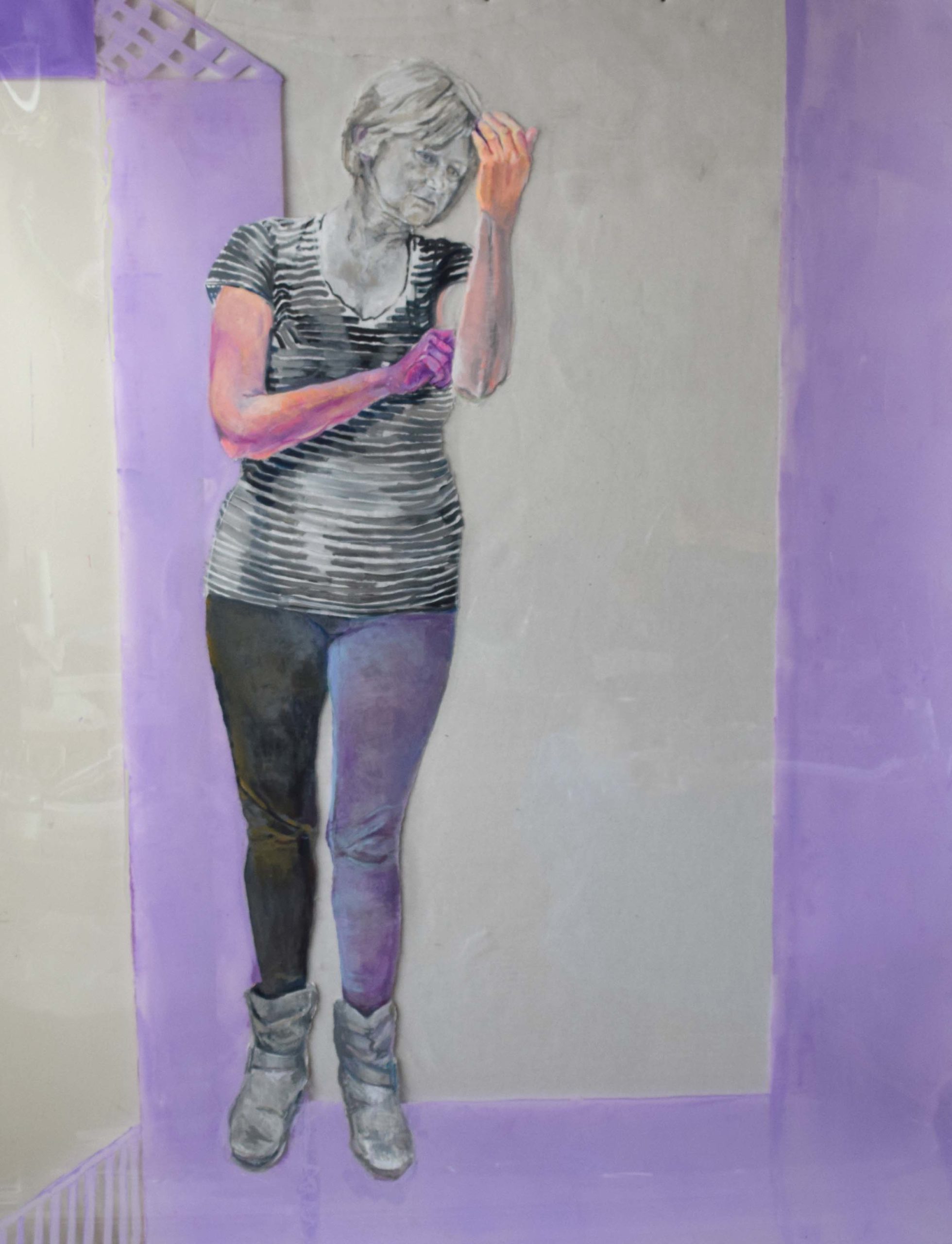 How does your personal background affect your work?
I realize now the extent to which my Polish background has had an impact on my painting. I was raised in Szczecin, Poland, where my brother and I used to play in ruins and on postwar bunkers. I have always been emotionally attached to the city of my childhood, adolescence and of part of my adult life, although the prevailing colour of buildings, stores, and yards I remember is grey in its different tones.

I understand you didn’t come straight to Guelph from Poland. What happened in the years between?
I came from Poland first to Columbia, Missouri in 1993, where I was working as a postdoctoral fellow in Animal Science and exhibited art on an amateur level.

I moved to Canada in 1996 and I decided to discontinue my scientific career to pursue a profession as a painter. I did a BA in Studio Art at the University of Guelph before returning to the US to do my graduate studies at Indiana University of Pennsylvania. 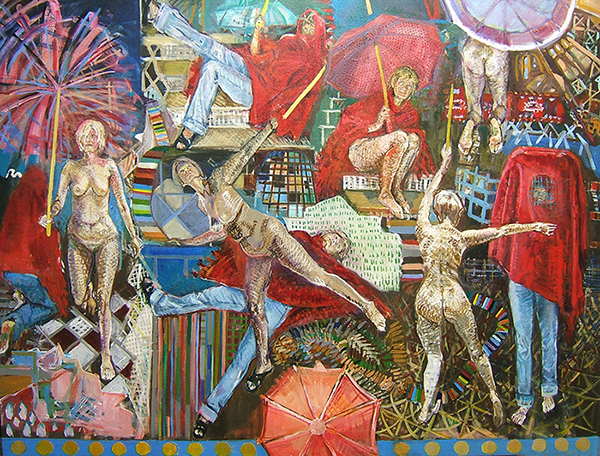 Being separated from my family and facing multiple problems I developed depressive moods also greatly influencing my work. My ideas of depicting me in a condition of turmoil and conflict was invigorated by inspiration from the painters Francis Bacon, Leon Golub, Nancy Spero and Marlene Dumas. During that time, I had several shows in Pittsburgh and Chicago, and was a member of Woman Made Gallery of Chicago.

After graduating with my MFA in 2006, I moved to Ames, Iowa to join my husband, a scientist at Iowa State University. I opened my studio on Main Street in the Town Centre Building in Ames.

It was soon after that we came back to Guelph for good in July of 2010. Then I started to signalize my existence as an artist on local grounds and do continue it, treating it very seriously.

What ideas influence you and drive your work?
One area of my research concerns looking at old context of melancholia in art through contemporary ideas about the aesthetics of disengagement.

My art makes use of materials common to our modern life. For instance, I use transparent and lightweight qualities of plastic film to stress the way depressed people are withdrawn from a social background. 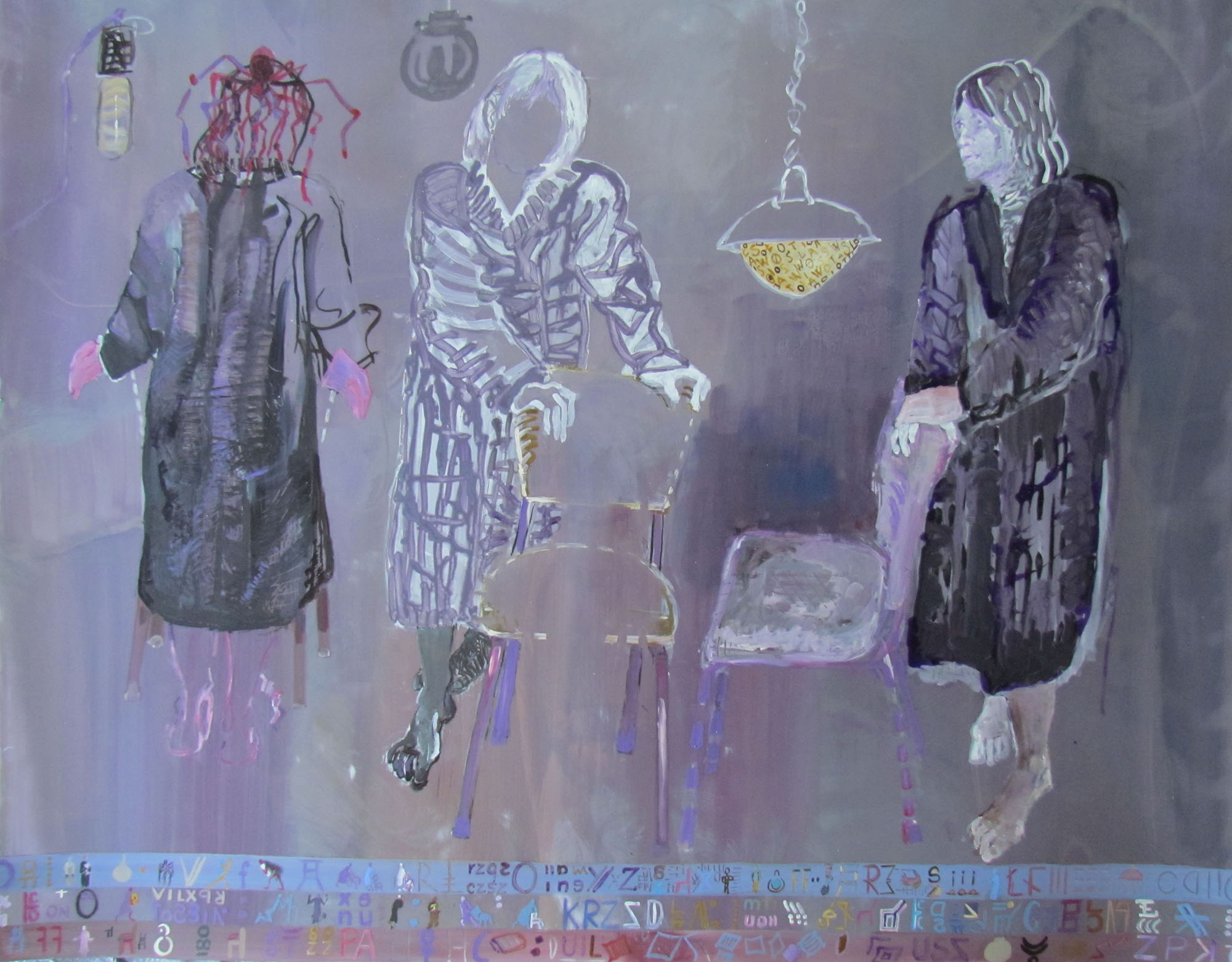 
Many of your paintings feature women – many are self-portraits. Can you elaborate on what these subjects mean to you?
In a recent series of figurative paintings, Poised and Unbalanced, I express my interest in instances of the contemporary woman’s subjectivity. The work depicts my desires to grow as an individual and as an artist by pursuing personally defined goals as well as to find freedom and meaning for sexuality in midlife, a critical time of transition for women.

I explore female figures through several revolving perspectives that help me reveal stages of instability on the way to a desired state of balance. 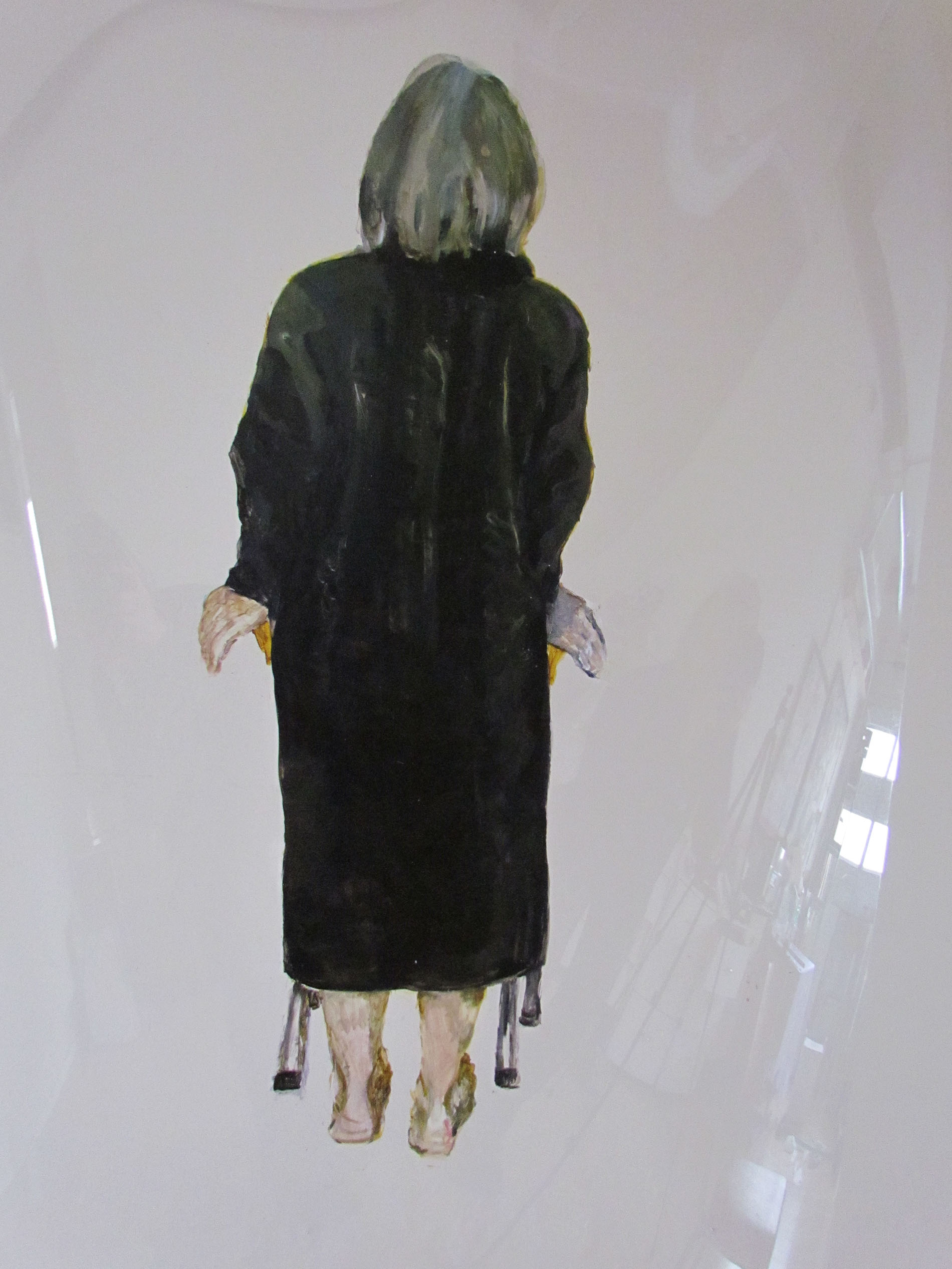 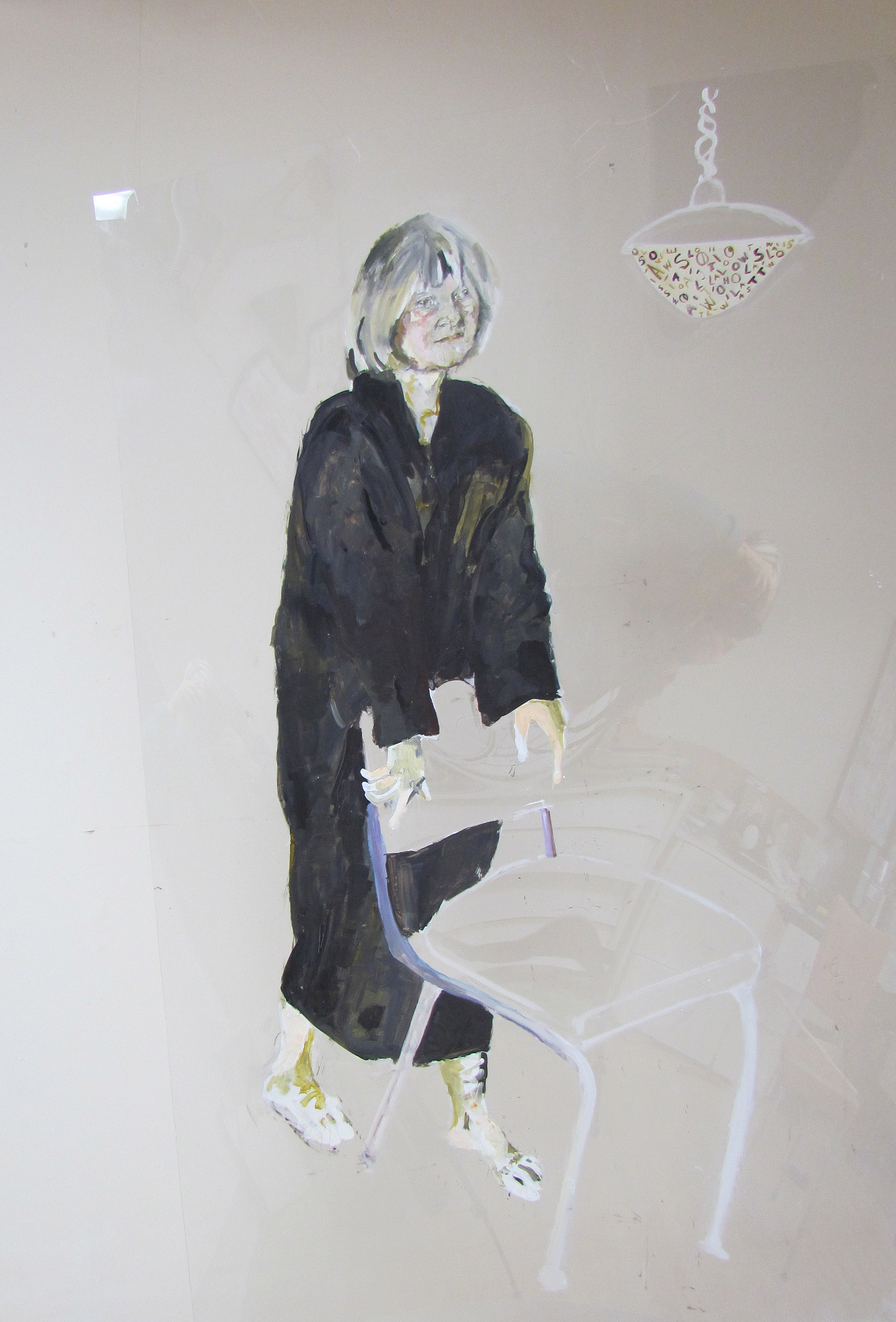 You continue to focus on the figure, and self-examination in your newest work. Can you tell me more about what you’re working on now?
My recent works relate to changes in my identity as I integrate into a culture while trying to find a nest and not to be marginalized. The figures/self-portraits are placed in nearly comfortable positions which go on to reveal the adequacy of my placement. These fittings serve as a metaphor of adjustment, dualism and the evolution of my Polish-Canadian identity.

These works will be shown at the Elora Centre for the Arts. Another artist joins me in the exhibit, Norman Busse, who shares some similar experience of an artist working in new country.

——
Free to attend, the exhibition is called Finding the Nest; Self-Identity and Otherness and opens with a reception on Thursday, April 5, 2018, from 7-9 p.m. The show will remain on view in the Minarovich Gallery at the Elora Centre for the Arts until May 13, 2018. An artful trip to Elora is always a worthwhile experience. I hope readers will make it to Elora to see some of what I have seen.