Steady drumming reverberated through the streets while the crowd in Market Square cheered, clapped, laughed, and even danced along. The pounding drums represented their heartbeats, united as the people stood together to learn about and appreciate the traditions and cultures of Canada’s First Nations, Métis, and Inuit peoples. It was National Indigenous Peoples Day in Canada on June 21st, 2018, and Guelph did not miss out on the celebration.

Master of Ceremonies Adrian Harjo welcomed attendees to the event, introducing the singers, speakers, drummers, and dancers. Guelph Mayor Cam Guthrie and Member of Provincial Parliament Mike Schreiner gave an acknowledgment to the First Peoples who had originally kept the land they stood on. Both expressed excitement at what they believed to be important steps towards “true reconciliation.”

Wiiji Numgumook Kwe, a local drum group headed by Anishinaabe Elder Jan Sherman, helped open the celebration with song. Sherman expressed hope for the future, stating that people must work toward “reconciling with our Mother Earth first, in order for us to reconcile with one another.” Once everyone had been introduced and the welcoming ceremony was completed, the evening’s dancers entered. 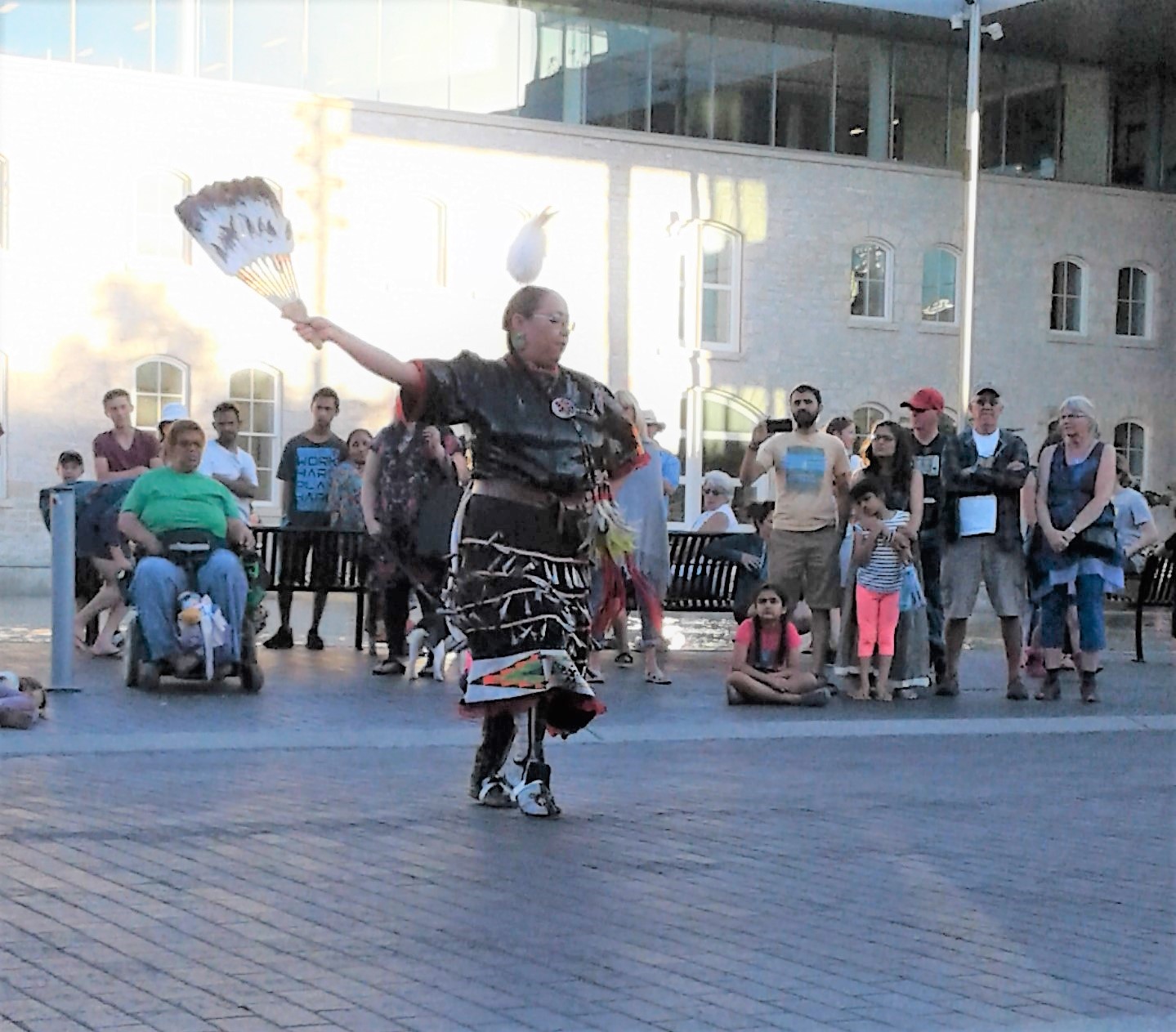 While Wild Cubs of Toronto drummed through the performances, various dancers demonstrated several traditional Indigenous dances as jingle, shawl, fancy, grass, and even hoop. With each type of dance came a history lesson, Adrian Harjo using the long-held tradition of oral storytelling to teach the audience about the origins and reasoning behind the dances. 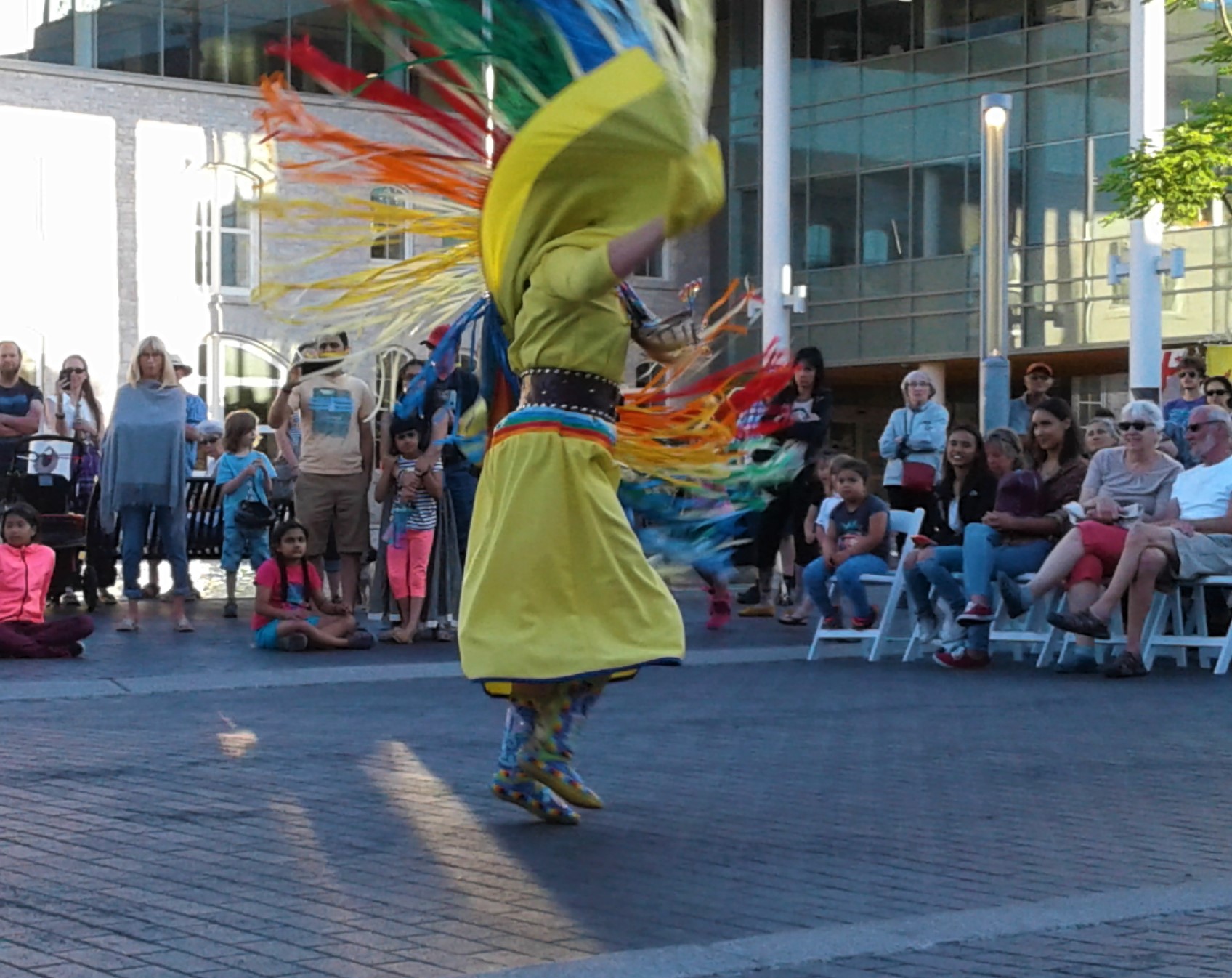 Dancer AJ Douglas spins in a blur of brilliant colour during a shawl dance.

Ascension Harjo, World Hoop Dance Teen Champion, performed a hoop dance that told the story of a world united, with every living being having its own part in a sacred circle.  Jingle dancers waved away negativity and sickness while the cones on their dresses made the sound of rain, using the restorative properties of water to heal.  The grass dance told the tale of a warrior, back from battle and sharing his story with the community. As Adrian Harjo explained to the crowds, men’s fancy dance – perhaps the most flamboyant and energetic of the dances – was developed beyond traditional regalia and dance steps in relatively recent history. The extravagant garments and athletic movements were amplified to attract the attention of rodeo scouts who could provide employment to Indigenous men post-colonization. And Métis jigging exists as a blend between and First Nations dance, representing the mixed heritage of the Métis. 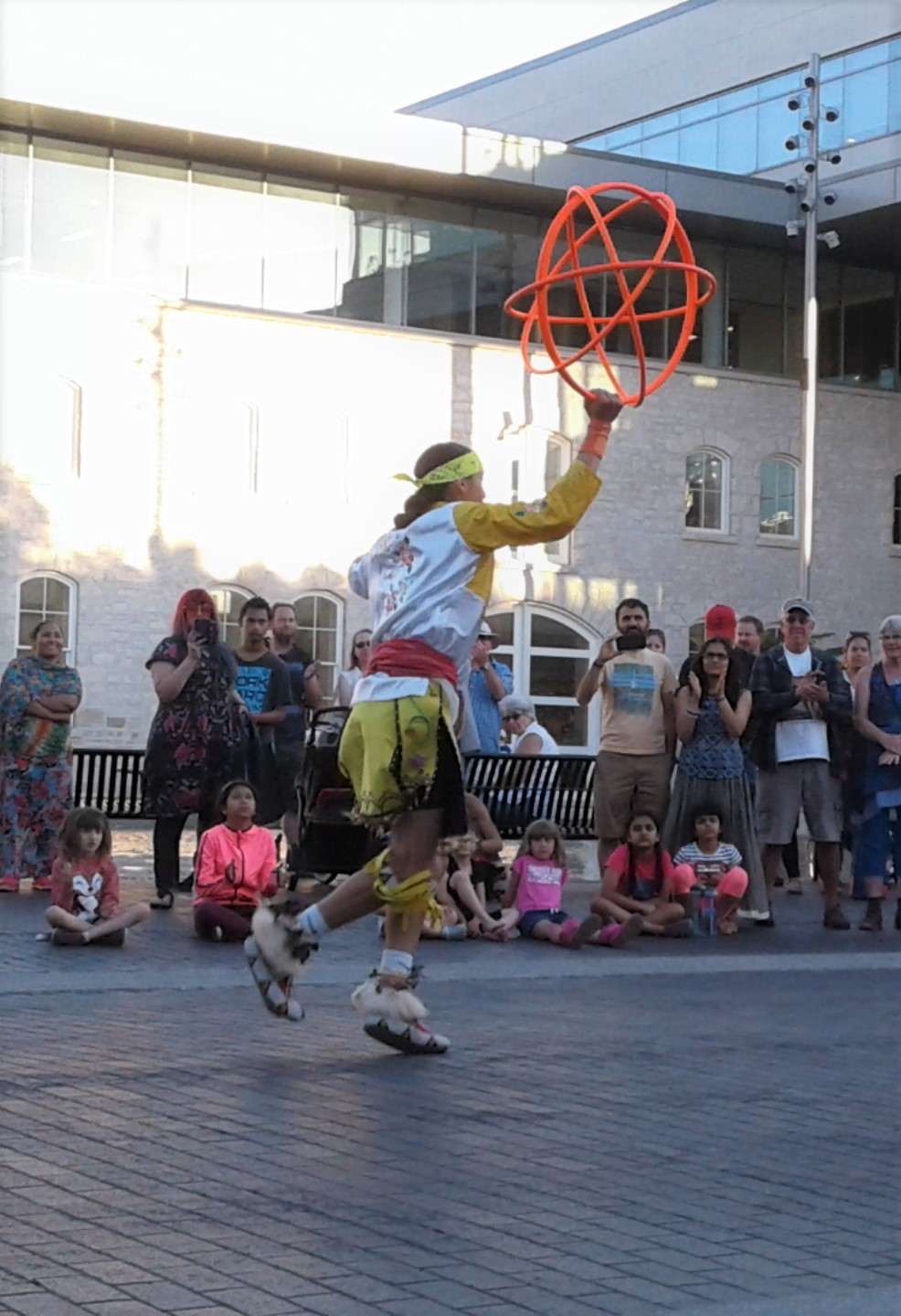 Ascension Harjo holds up a world united, represented by hoops.

One side of Carden Street was lined with vendor tables where various groups and organizations were selling their wares. In the shade beside the splash pad stood an unofficial children’s section, where kids could partake in educational activities such as playing an Inuit stick and bone game. People could come and go from the dance area to admire and buy various items such as smudge bowls, feast bundles, medicine bags, waist sashes, and dream catchers. 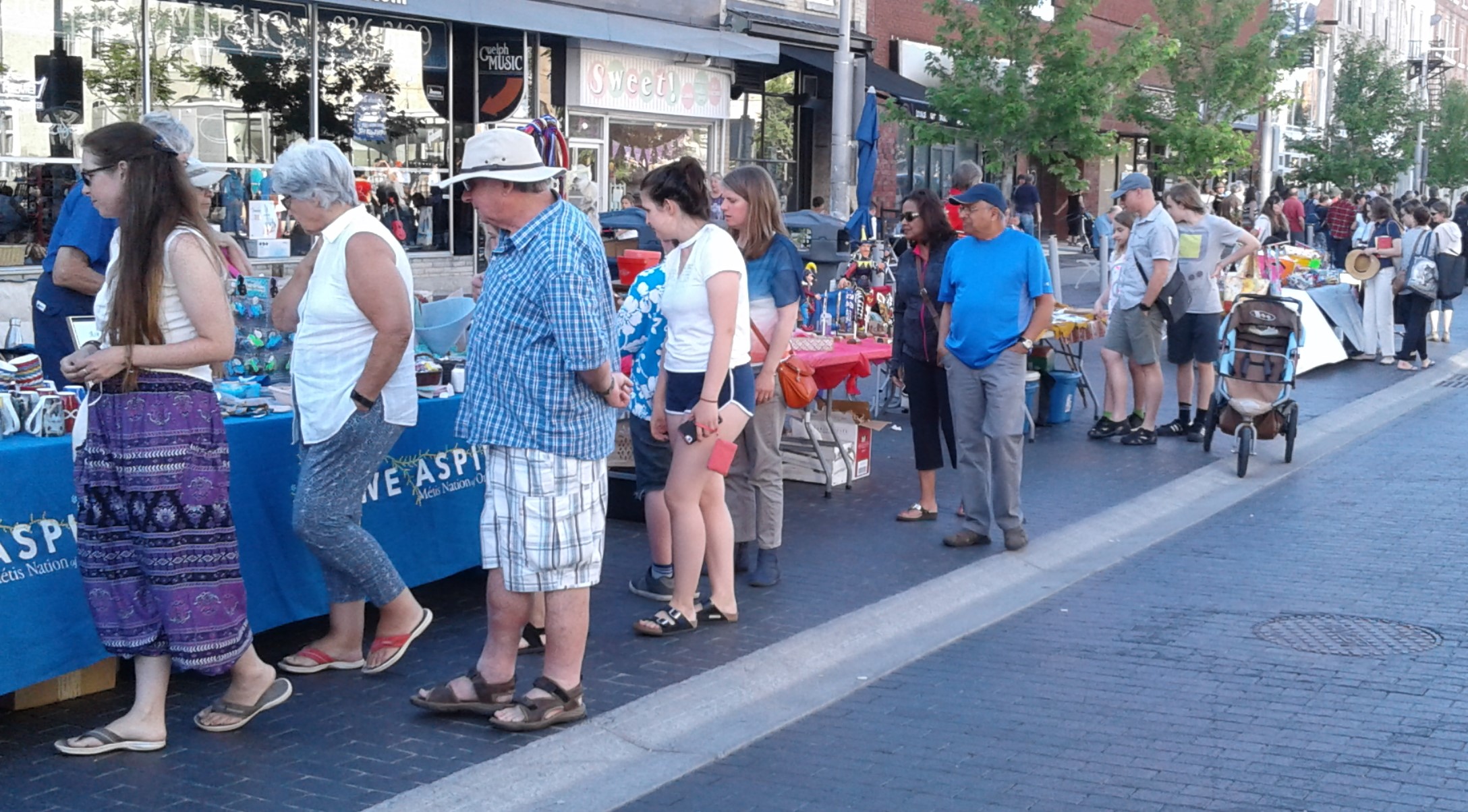 Groups of attendees look over the wares of various Indigenous groups and organizations.

As sunset approached, Wiiji Numgumook Kwe invited attendees to take part in a drum circle so they could sing a Friendship Song, among others. Dozens of people joined hands and formed a circle, representing unity, the circle of life, and all of the cycles that exist in life and nature. They were instructed on how to do a friendship dance, resulting in a lot of nervous but excited giggles among the crowd.

Those who attended the celebration were afforded the opportunity to learn about Indigenous Canadian history and contemporary issues facing Indigenous peoples today. It drew in a significant crowd of people eager to learn about and support Indigenous peoples and communities. Dave McConnell, a visitor to the Guelph Indigenous Peoples Day Celebration, said that his experience helped to truly demonstrate “the different levels of complexity that face the indigenous community as a whole with regard to their culture and history.” While he expressed sadness that education about such issues is still under-accessed by many people, McConnell was also happy to see the large number of people who attended and participated in the celebration. “My wife and I were particularly happy to see the numbers because it is a sign, it seems, that individuals in our community are interested in indigenous issues and culture and want to participate and learn.” 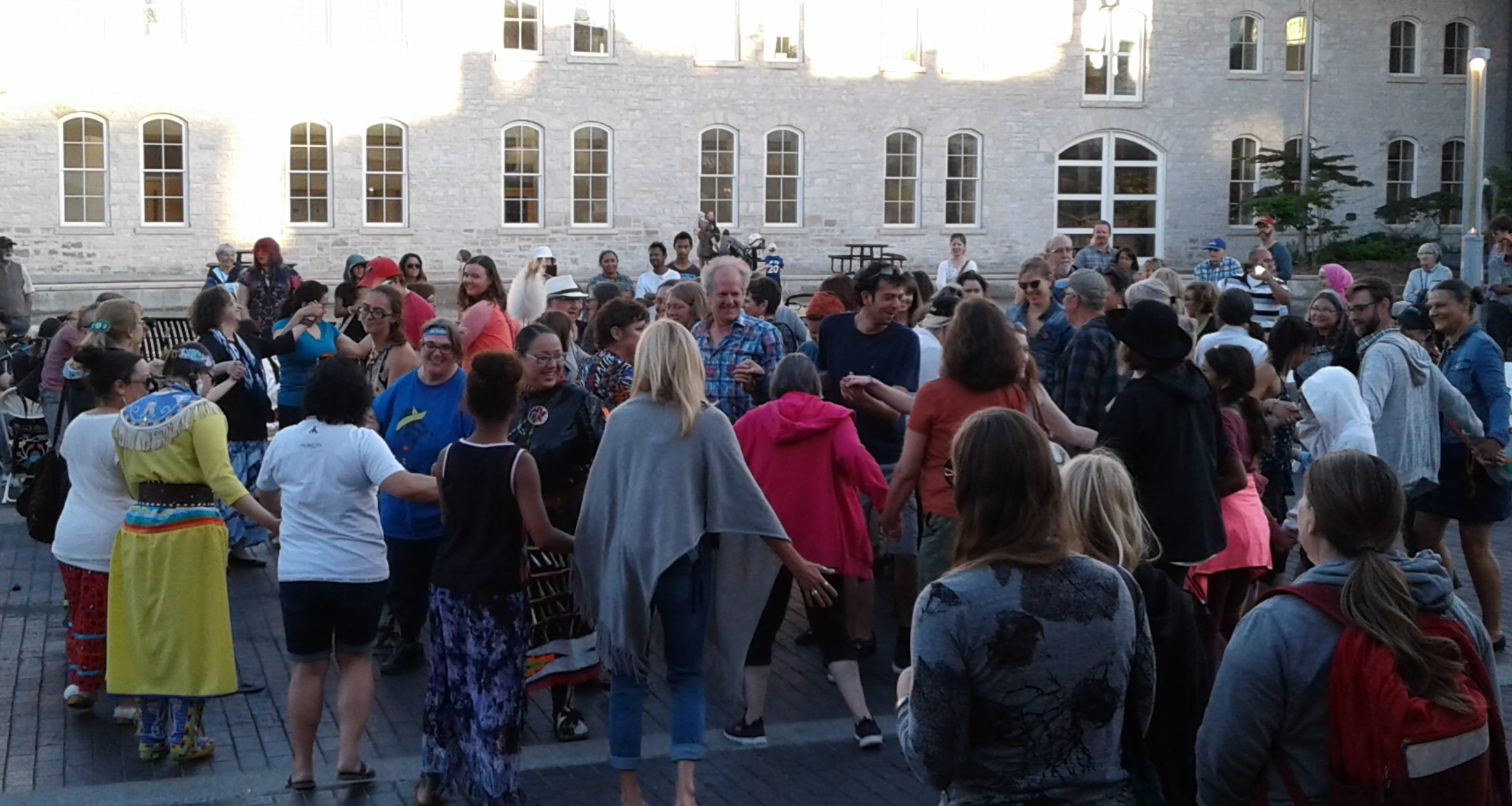 More and more people joined in on the round dance, excited to take part in a Friendship Song.

The evening was brought to a close with some final remarks from Jennifer Parkinson, President of the Grand River Métis Council and primary organizer of Guelph’s First Nations, Inuit, and Métis Celebration. Finally, Wiiji Numgumook Kwe sang and drummed a traveling song, facing in the four cardinal directions to help safely guide listeners home.

Indigenous Elders and storytellers came together and shared inspiring gifts of knowledge, truth, friendship, and compassion with all who attended the Indigenous Peoples Day celebration in downtown Guelph. Events such as this help combat the historic erasure of Indigenous peoples and their cultures, inviting people of all backgrounds and heritage to learn about these cultures and build a stronger understanding of them. Every speaker shared the desire to promote unity, creating a circle of friendship and mutual respect among all people on Turtle Island, also known as North America. At the end of the night, all those who came with an open heart and open mind can know they brought home a renewed hope for the future of reconciliation in Canada.