Sue Williams never dreamed of being a writer. And she certainly didn’t dream of sailing across the Atlantic Ocean. So how is it possible that she is now the author of a memoir about her voyage across the Atlantic and back? Well, as you will learn if you read “Ready to Come About” (Dundurn Press), people can do remarkable things when they set their mind to it. And Sue Williams did just that.

Sue and David Williams aboard Inia during their trip across the Atlantic.

Williams was an occupational therapist. She helped people find dignity and hope in difficult times. She loved her work. Her creative outlet since childhood was textile art; her diary unused. Although she happily joined in family sailing vacations, she didn’t know a tack from a jibe.

But Sue knew her husband David Williams did have a life-long dream to cross an ocean. And when he unexpectedly found himself unemployed in his 50s, Sue sat up in bed one night and said, “This is your opportunity.” Then she surprised herself by saying “and I’ll go too.” That’s when she set her mind to do the crossing.

Sue had already been thinking that perhaps she and David needed to give a little more space to their three grown sons who were striving to chart their own paths in life. A year abroad would certainly achieve that, she reasoned. That personal journey of letting go as a parent would become the emotional back story of the book – one any parent or child can relate to.

Sue and David spent a year preparing and putting their lives in Guelph on hold, then departed Hamilton harbour in May 2007. After a “rocky” start, more things went wrong. Lots of things. Things like a fishing net taking out their engine in the middle of the ocean. Storms. More storms. Seasickness. One day in the midst of it all Sue said to David, “If either of us could write, this would make a good book.” She said he should write it. But as captain, David was for too busy with charts and weather forecasts and freighters, and he said she should do it. That’s when Sue set her mind to writing a book. Three different people had given her journals as bon voyage gifts, so she already had notes. She created an outline and started fleshing it out from the journals and the “sail mail” messages they had exchanged with friends and family. Then one day on board she showed David the first 20 pages and he said “Wow.”

When they got back (sorry, spoiler) Sue wrote while working full-time as an OT. But then life happened and Sue had to shelve her book for four years. That turned out to be a good thing: “After that break I could look at it objectively.”

A friend who read her first draft commented that she must have taken writing lessons. “I didn’t know there was such a thing,” Sue says. So she dove into writing courses: several at U of G and U of T; one with award-winning author Miriam Toews, who is quoted on the cover; one by Guelph author Barbara Kyle, which led her to an agent; and one with Brian Henry on memoirs that she was afraid would be out of her league. “I was shaking going in,” Sue says, “but then I was thrilled by how practical it was.” David encouraged her all the way. “She was like a sponge,” he says.

Sue learned to cut anything that didn’t propel the narrative forward – even if it was good. And not to tell the same story twice: “There are only so many words for wind and waves.” She cut her draft from 130,000 words to 90,000. She took courses on dialogue and added conversations that put readers right there on the boat with them.

Sue hit a turning point in early 2016 when her agent asked for a completed manuscript within a year. David encouraged her to quit her job, after more than 30 years as an OT. “I missed it at first,” Sue says, “but it was the right decision…. I didn’t know I loved writing. It was a wonderful thing to discover.”

David was then teaching at Conestoga College in Kitchener and Sue would go with him and spend eight-hour days writing in the cafeteria. “It was noisy, but I liked it,” she says. “It was productive. I had this block of time where I wasn’t going anywhere.”

In February 2018 Sue signed with Dundurn Press of Toronto. She encourages other writers to explore independent publishers – but not to send out a manuscript until it is “as perfect as you can get it, because you only have one kick at the can.” 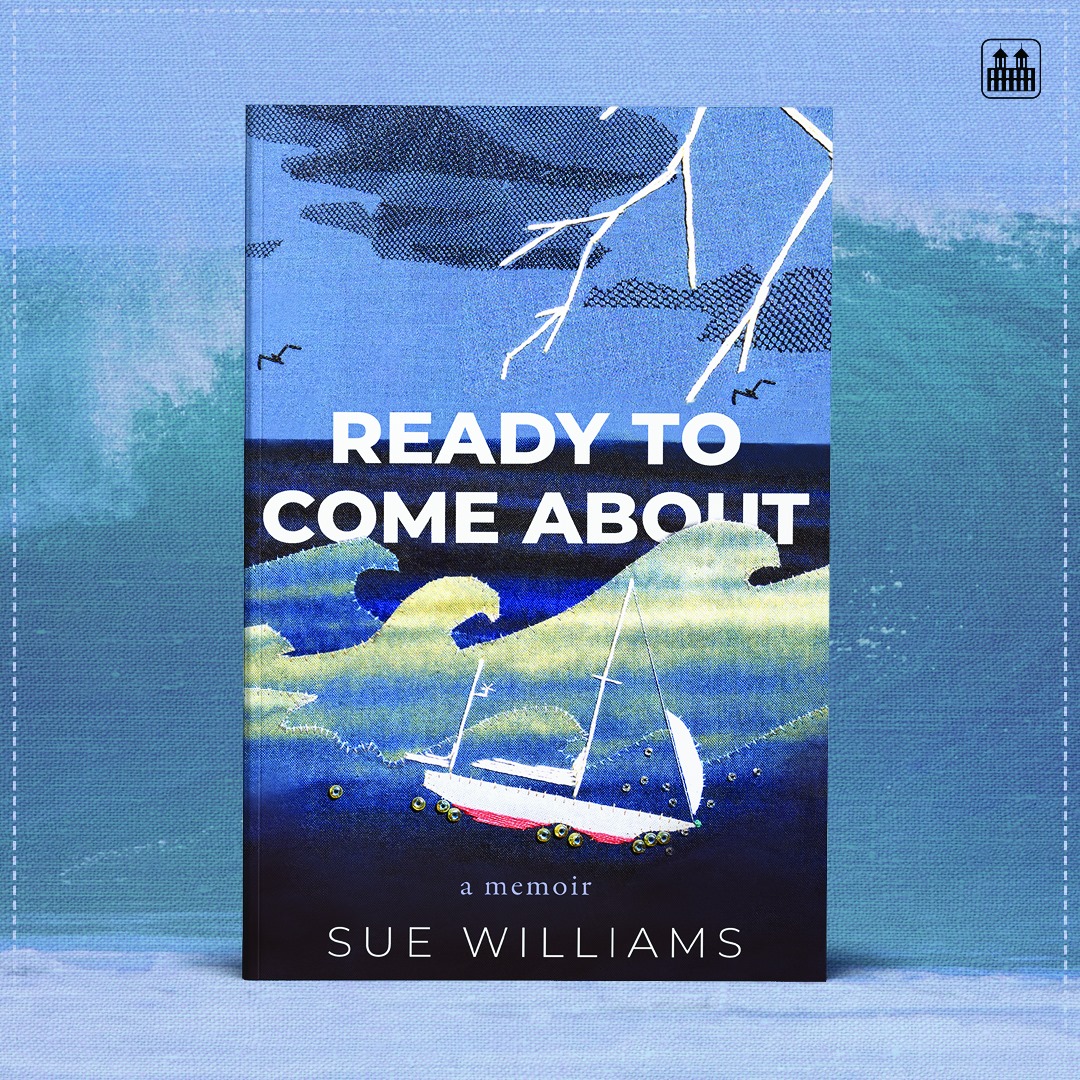 The book launched to a full house at Guelph’s eBar on June 6, 2019. Sue then headed off on a flurry of speaking engagements and signings – another challenge for someone who admits she likes solitude and is terrified of public speaking. Then, on June 21, Sue got “shockingly great news” when The Globe and Mail included “Ready to Come About” on its list of recommended summer reads.

Sue is 80 pages into writing into her next book, which is on home care, a topic close to her heart. “I’m busy with marketing right now,” Sue says, “but I can’t wait to get back to it.” We’re sure she will.