“Stunning!” is the word that came to mind the first time I viewed the works of Guelph artist Vickie Martin.

Vickie grew up in Oakville when it was considered a small town and everyone knew each other, not unlike Guelph at the time. That’s one of the reasons Vickie and her husband David decided to settle here.She did her undergraduate degree in computer science and in her 4th year won the Mark A. Levy Award for outstanding excellence in that field. Vickie was encouraged to do her graduate work at the University of Toronto and eventually received her Masters in Computer Science specializing in database design and file structures. She went on to teach computer science at Seneca College, Sheridan College, and York University.

After 26 years of being a practicing artist, Vickie’s fascination with abstraction and structures paved the way into thinking in terms of colour, shapes, and structure in her paintings using a range of mediums including oil, water colour, acrylic, and mixed media. Vickie took some lessons from Nan Hogg in the 90’s and was encouraged then to pursue her own vision, which she continues to do. Vickie feels that you should paint “who you are, which is your soul speaking to the world.” Legally blind, visions come to Vickie in her dreams and meditations. The adult onset of visual impairment awakened the ability to express her emotions through her work. 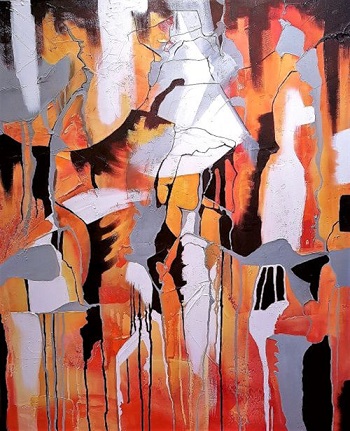 Vickie is an active member of our community showing her support of many of Guelph’s fundraising initiatives. Over the years some of the recipients of her art include Guelph Wellington AIDS Association, Hospice Wellington, and Stonehenge. She’s been nominated twice for a Women of Distinction Award. Her painting Unity was used on W.O.D.’s brochure and on the awards given to the nominees in 2011. Vickie has taught at the Wellington County Museum. She also has two paintings in the eBar show Flourish which opened April 30th,and is a participant in the Guelph Studio Tour. This summer Vickie will participate in Art in the Park in Bronte on August 5th and will be at the Toronto Distillery Show on Labour Day weekend.

Details of these events will be posted on her website vickiemartinoriginals.com

Vickie Martin is a Guelph Visionary artist, who uses the concept of abstraction in her paintings. In mathematics and computer science mathematical proofs and pseudo computer code is used to abstract ideas, to build structures, and to prove if a problem is computable or not. There is a relationship between what already exists and what may be possible. Often abstraction is used to explore the universe for new thoughts to emerge and for new entities to be developed.

Instead of using mathematical proofs and pseudo computer code to form structure and relationship we use composition, colour and texture. I consider myself as an abstract artist because my compositions lend one to mind exploration. In my abstract landscapes I use unconventional colours for trees or other objects. I use different mediums such as molding paste, granular gel, collage layering, and oil impasto to create structure, depth and different viewpoints in my pure abstract pieces.

Each piece is presented to me through dreams and meditation since I am a visually impaired artist. Because of this, each painting not only has an outer message but often has an inner message.