Why I volunteer for Doors Open Guelph

Jane is rather good at avoiding the camera. This is long time volunteer Dave McConnell in 2018. All photos by Scott McQuarrie, Ward 1 Studios.

The mausoleum? Really? You want me to spend my Saturday morning at a crematorium? That’s what I thought when I received my first Doors Open Guelph volunteer assignment, in 2005. I had signed up as a favour to friends who were the event co-ordinators. That’s why I was a little taken aback when I got my posting. If this is where you put your friends, I wondered, where do you send your enemies? The prison?

But when I strolled through the tranquil gardens of Woodlawn Memorial Park, arrived at the stunning Art Deco building, and opened its stately doors on that rainy April day, I was instantly entranced by its unexpected beauty. I realized this is a place where people honour and remember their loved ones, and the glistening marble, restored ornate plaster ceilings, and stained-glass windows took my breath away. 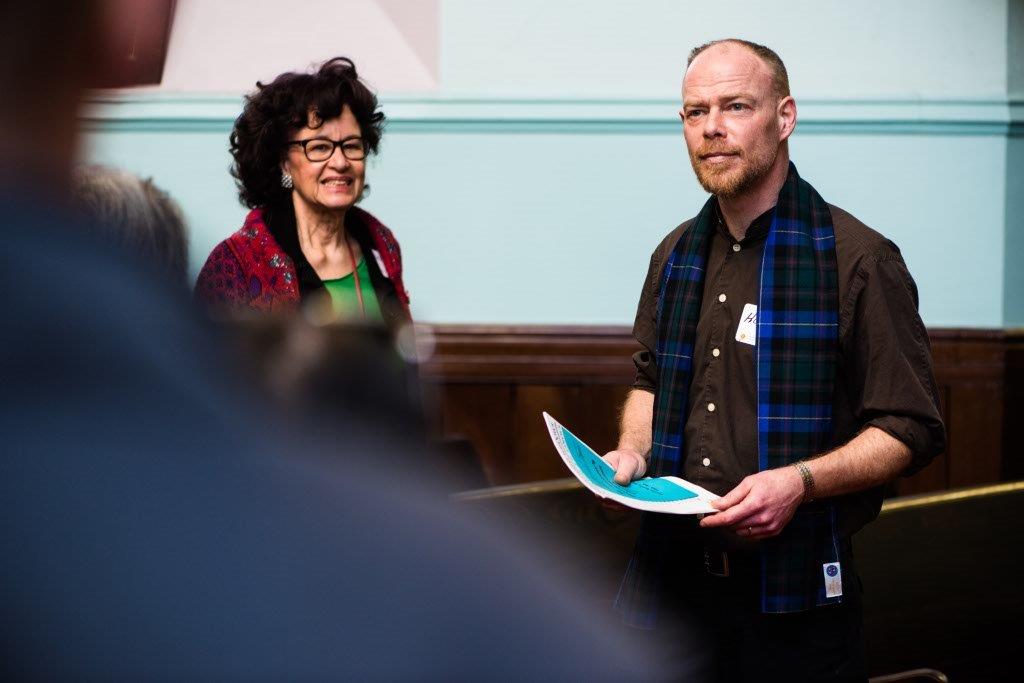 Merle Griffin is a dedicated sweep. In 2018 she supported Henry Muth as he guided this tour of St Andrews.

That morning, as I eavesdropped on the tour guide, the site owners and the guests, I learned a great deal, including who to talk to about my own damaged ornate plaster ceilings. When my shift ended, I was reluctant to leave, and I wished I had a way to urge more people to visit this hidden gem while they could. (That was before social media, for me anyway.)

I have only missed one Doors Open Guelph since. I was a counter that first year; since then I have usually volunteered as a tour guide. And years later, when I was assigned to the cemetery keeper’s house at Woodlawn Memorial Park, I didn’t bat an eye. That will be interesting, I thought. And it was. As for prison? I didn’t get to volunteer there, but the Guelph Correctional Centre was one of the most popular Doors Open Guelph sites ever. 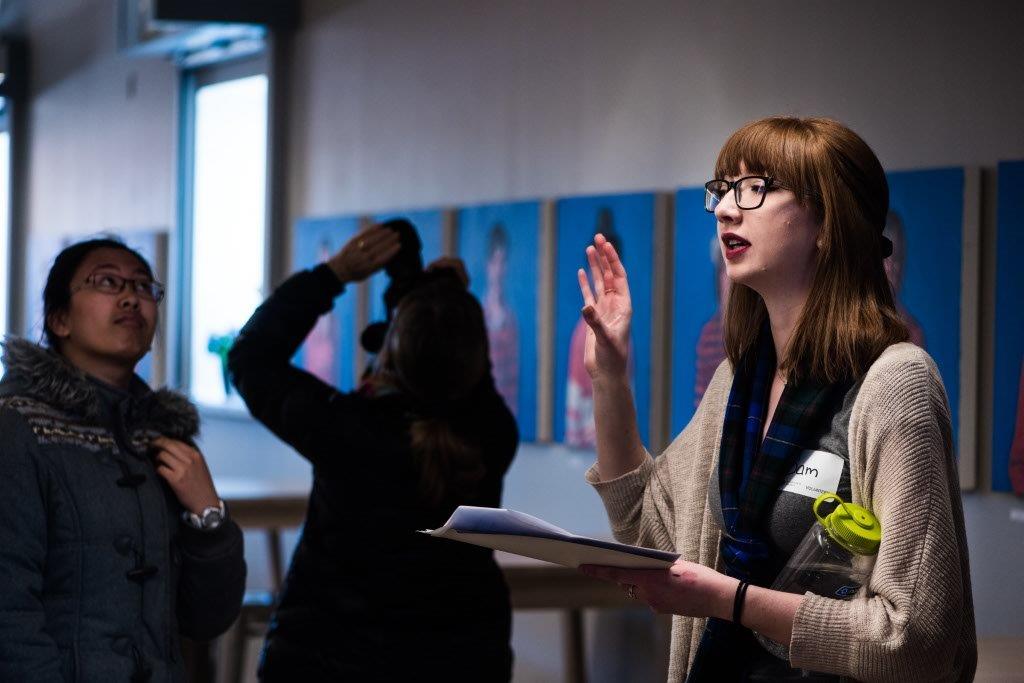 Private houses are favourite sites for me, and they are always popular with visitors. I have been honoured to guide people through the homes of some of my friends and neighbours, places I had seen often, but really knew little about. Like London House bed and breakfast with its spindle motifs to honour the sewing machine manufacturer who lived there. Another friend’s house had been home to Guelph’s mayor long ago, and a stone beauty on Green Street held echoes of garden parties in days gone by. 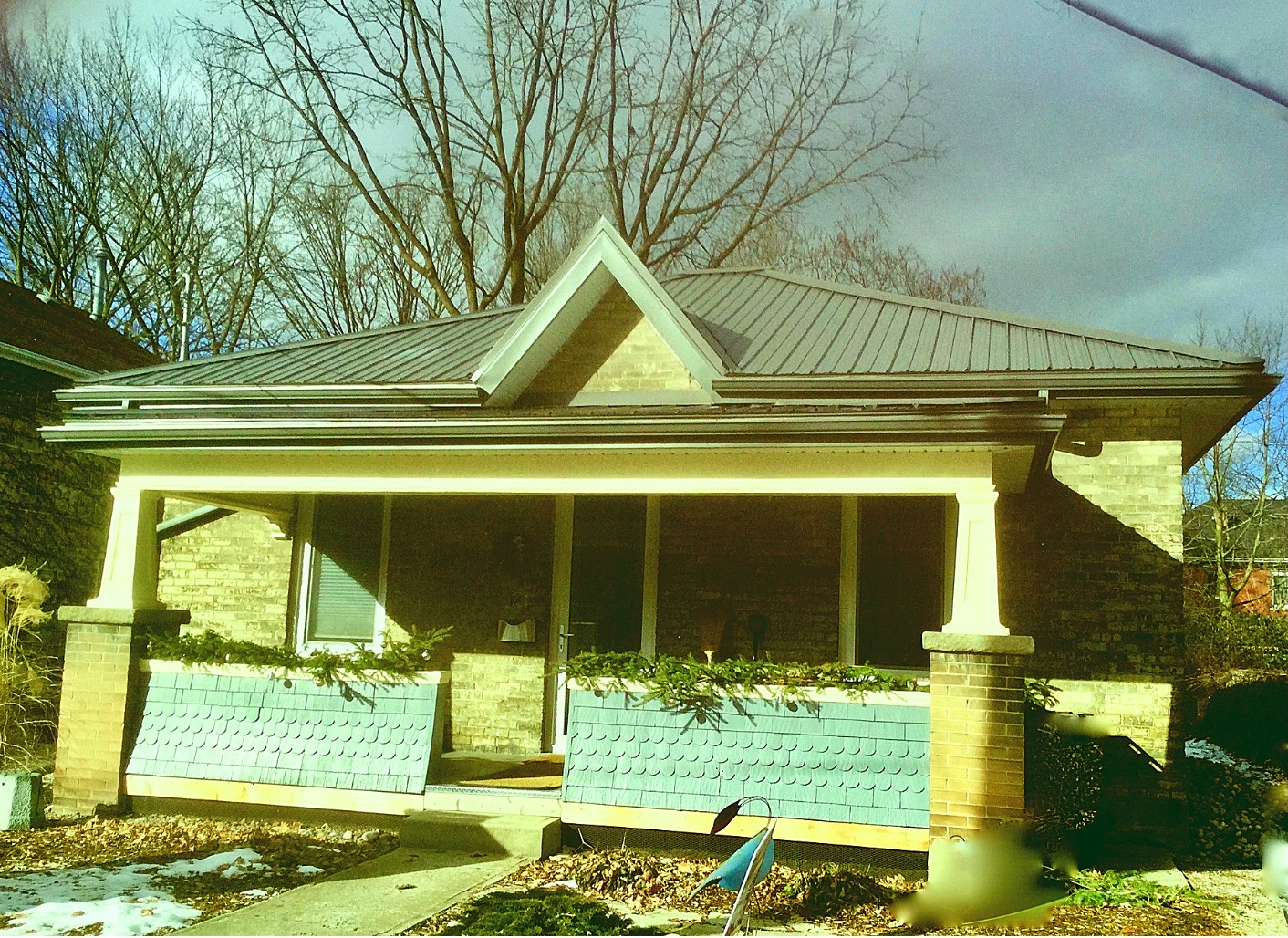 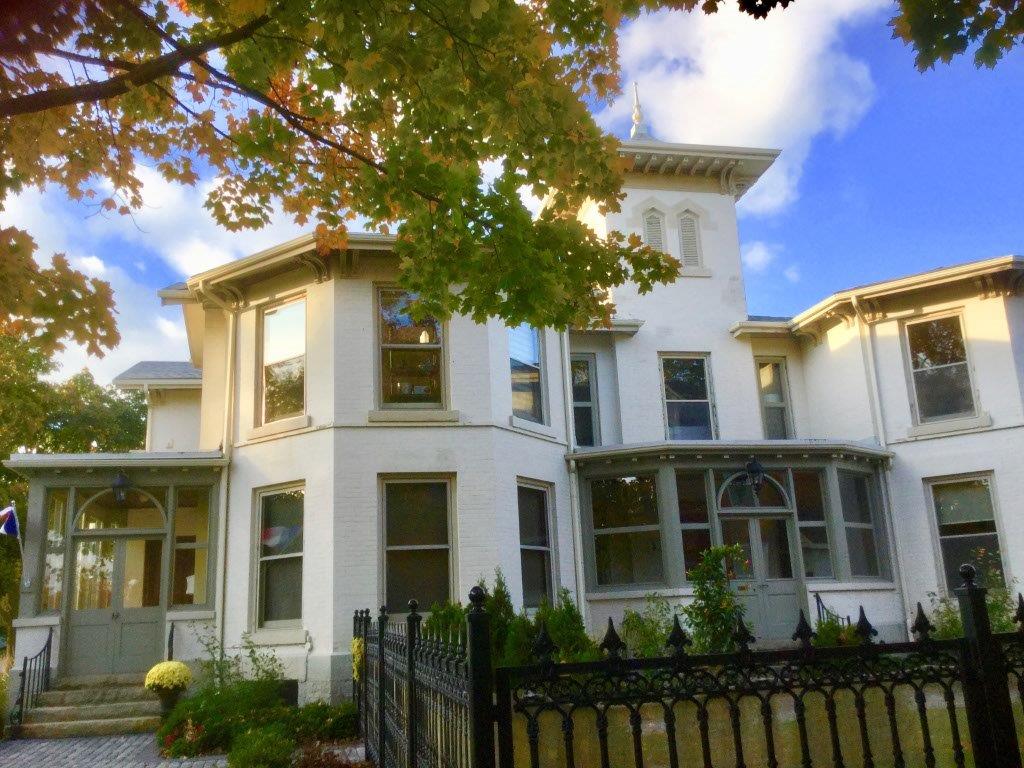 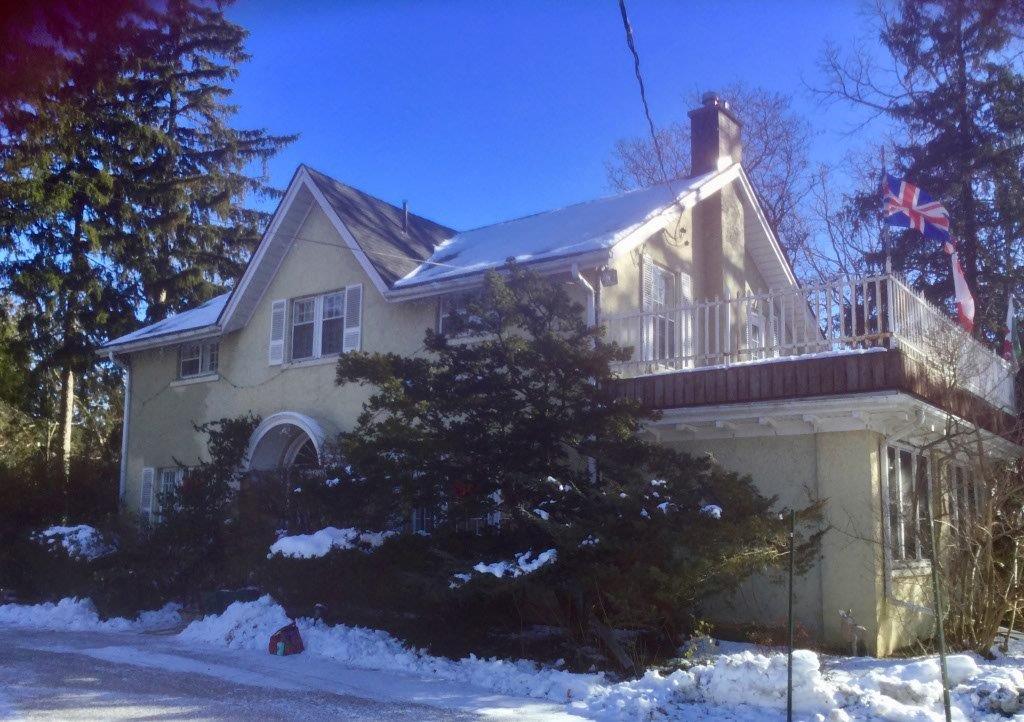 Aberdeen House, Lornewood Mansion and Greenbriar are three homes that can be toured on this year’s event. Volunteers get to skip to the front of the line!

One of my favourite parts, as a tour guide, is researching the site. This isn’t really necessary, because Guelph’s multi-talented heritage advocate Susan Ratcliffe and her team provide plenty of information for volunteers and guests, but I love learning about things I didn’t know I was interested in. Did you know sewing machines from Guelph were exported around the world in the 19th century? I also love discovering the stories behind a building I have often walked by but never really thought about. Have you noticed the carvings on the front of Guelph’s old city hall? 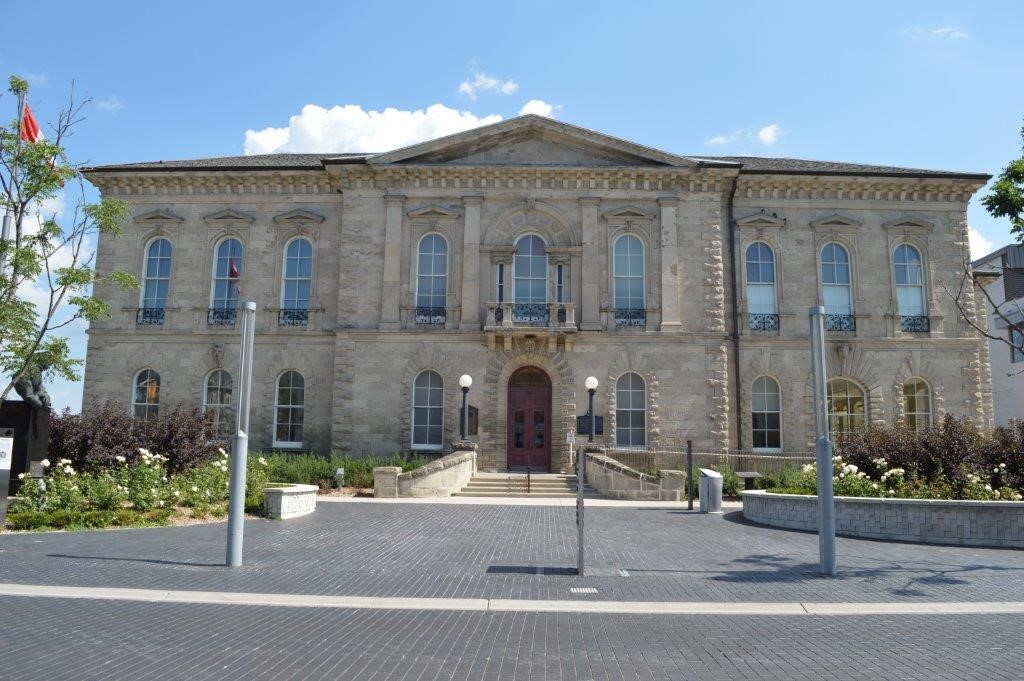 Formerly City Hall, now the Provincial Offences Court, this grand old building at the corner of Carden and Wyndham will be featured on Doors Open Guelph 2019.

Another plus is seeing places you can’t normally go inside. This is true for visitors too, of course, but volunteers truly get a backstage pass. It’s also a treat to meet other volunteers, from young students to long-time Guelphites, to the mother who comes from another city to volunteer with her daughter. Let’s not forget the site owners, incredibly generous to open their doors, and rightfully proud of their buildings. In 2018 I was thrilled to be on the team at the award-winning restored Petrie Building as the owners and tenant businesses graciously opened theirs. And the visitors – curious and grateful for the opportunity – many from out of town, some of them on a mission to see as many sites as they can in one day, some with wonderful stories about their connection to the building. 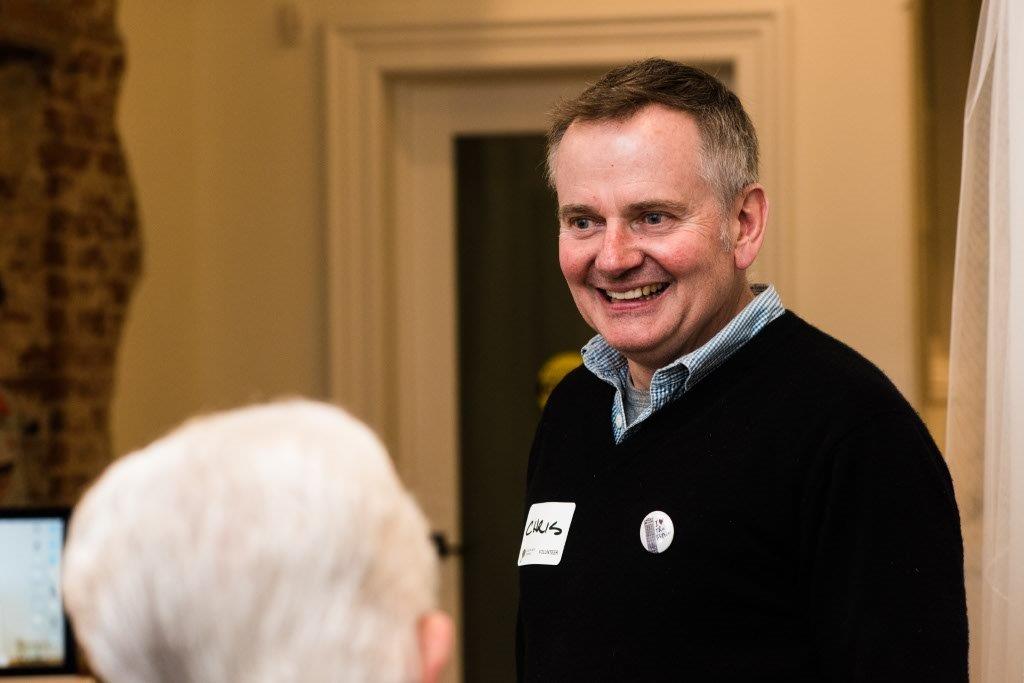 On the same team as the elusive Jane Litchfield, Chris Campbell leads groups through the recently restored New Petrie Building in 2018.

As a volunteer position, Doors Open Guelph is not demanding: an orientation session and some on-site training, a little research if you want, and then four hours on a Saturday in April. (April 27 in 2019.) Plus, you get head-of-the-line privileges at other sites that day. Fortunately for me, you do not have to be knowledgeable about history or architecture to be a DOG volunteer. (It’s nice to be curious, though.) As mentioned, there are experts who research the sites and prepare scripts for tour guides and background information for guests. No doubt that wealth of information is one reason Doors Open Guelph attracts so many visitors and gets great reviews.

If you’re looking for a four-hour feel-good gig in April, I encourage you to sign up here. You can be a counter, greeter, sweep, tour guide, or site captain. You’ll be glad you did.