There’s a new group in Guelph for teens who are interested in arts and change making. “Artsy Activists” is a youth-led safe space and activist collective for teens of all backgrounds.

You may have heard about them from their recent “Keeping Families Together” event at Guelph’s Market Square. The group made posters and signs and invited community members to join them in a gathering to show solidarity with families who were separated after crossing the U.S.-Mexico border.

GCVI students Sequoia Kim and Elise Kephart launched Artsy Activists in April with funding help from Guelph Arts Council’s Youth Opportunities Award. Their goal is to inspire and empower young people to make a difference through open discussions and working together on community initiatives. 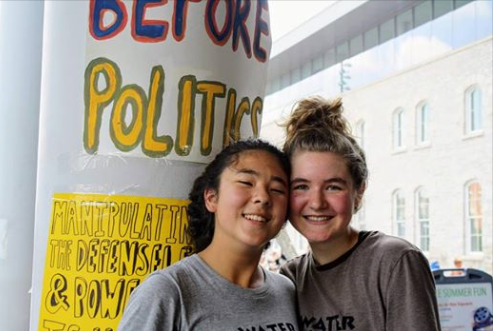 Artsy Activists come from multiple Guelph schools and sometimes outside Guelph. There’s no attendance-taking and no strict agenda. “So people can come late, leave early or just show up for occasional meetings,” Elise says. The group is inclusive of, but not limited to, LGBTQ2S+, female-identified, Indigenous and immigrant youth, and youth of colour. Ages generally range from 13-19, but Elise says they “don’t check ID” and some 6-year-olds even joined in when they were painting in the park one day.

At any meeting there might be as many as 30 or as few as 5 teens attending. “The dynamic changes at every meeting,” says Sequoia. “At first I thought ‘Oh no’ but now I’ve grown to love that… Some of our best meetings have been with small groups.”

At their launch, the leaders put up posters with questions such as what is art? What is activism? What would you like to do? They got lots of ideas. Elise says art and activism are a natural combination. “Art connects people, it helps people understand one another and that’s what is needed to promote activism. It’s also therapeutic.”

Sequoia concurs on the therapeutic benefits: “It can be draining to be an activist. Also, often the problem with activism is that it’s misunderstood. If people are shouting they can’t hear each other’s message. But art can speak in a way that is easier to convey. Two very different people can look at the same painting and get a message.”

The group’s first initiative was to contribute creations such as buttons or poems to Gumball Press, a Guelph-based art-vending project, which in turn will give the proceeds back to Artsy Activists. At another meeting they made “water is life” t-shirts to raise awareness on Indigenous and environmental issues using art from Ojibway artist Isaac Murdoch, who had visited GCVI.

The young activists have discussed topics including social media pros and cons, Indigenous issues, and “slacktivism” (when people think posting a photo or liking a post will make other people think they are “a good person”). Elise and Sequoia said a key part of Artsy Activists is spreading the word about events happening around Guelph and going to them together to show support. In July some of the group attended a screening and discussion of the film “Angry Inuk” hosted by Art Gallery of Guelph. Plans for future gatherings include a radio program, yoga, mindfulness exercises, and a clothing swap.

GAC dropped in on a recent meeting and asked some attendees what they like about Artsy Activists.

Indigo: Most things for kids are run by adults. Here, there’s less telling you what to do.

Riley: I like that it’s a positive, safe, and inclusive space that promotes the arts.

Denya: It caters to everyone. There’s no pressure. If you want to be social, you can, or if you just want to do art, you can.

Victoria: I like to hear everyone’s ideas and views of the world.

Sequoia says the benefit of starting a youth-run program is that it’s “a huge learning experience. We had to figure things out on our own, instead of being taught.”

Elise says one possible concern about being a youth-run organization is that people might not take them seriously. “Some people think that because we’re teens we just hang out and don’t do anything.” But she says they’ve made some wonderful connections with adults in the community, including at Art Gallery of Guelph, CFRU, and Plastic-Free Guelph. She adds that Dan Evans is a “huge supporter” who offered them their meeting space at Publication Studio and helps them connect with other community supports.

Sequoia and Elise encourage other youth who are thinking of starting something to go for it. “Just do it,” says Sequoia, “surround yourself with people who are on the same page and start. It probably won’t happen right away. I had ‘Artsy Activists Meeting’ scribbled out on my calendar so many times.”

They also encourage young people to apply for Guelph Arts Council’s Youth Opportunities Award. “The award has helped us not only hit the ground running with funds to support our endeavours, but also has shown us that people believe in youth and want to help us be change makers in the community. This was instrumental in helping us start up and gave us something to lean on.”

They heard about the award from Jessica Jang, who received it in 2016 for her Print Power Project, a free weekend-long learning experience for youth. That’s where the idea for Artsy Activists was sparked, and Jessica continues to support Elise and Sequoia.

The Youth Opportunities Award offers funds each year to a project (or projects) that will initiate, enhance, or expand opportunities for children and youth to experience or become engaged in the arts. Youth are particularly encouraged to apply, although adult-run initiatives for youth are also welcome. If you have an idea, the deadline to apply for the 2018 award is November 15.

The Artsy Activists used their award money to buy art supplies and second-hand t-shirts for printing, as well as snacks and bus tickets to get started. (They now have bus tickets donated by Guelph Transit.) They also welcome donations of art and craft supplies — “anything we can create with.”

New Artsy Activists are welcome, with no sign-up required. “Just show up” at Publication Studio Guelph (in the Boarding House Arts building), 6 Dublin St. S., from 5-6:30 pm on Tuesdays. You can find the Artsy Activists on Facebook and Instagram or email them at [email protected] (note that activist is singular).