Art has the power to create opportunities and spaces for underrepresented voices to be heard.  In 2018, Queer Youth Arts utilized their creative skills to do just that.  Feeling “frustrated by the lack of youth-focused pride events”, members Victoria Johnson, Charlotte McAren-Cayer ,and Carling Serran used the money from their GAC Youth Opportunities Award  to organize a weeklong art show for youth who identify as LGBTQ+.

Since applications are now open for 2019 award, we thought we’d check in with Queer Youth Arts to reflect on their experiences and see where they are today.

GAC: Tell us a about Queer Youth Arts and what inspires you as a group?

QYA: At the time that Queer Youth Arts was created, we were three grade twelve students who were a little fed up with the lack of not just youth inclusive, but youth focused pride events. We felt (and still feel) that community is especially important for youth who may be facing a lot of challenges in their own lives regarding gender or sexuality. We applied to be a part of Guelph Pride and run an event alongside them, however we never heard a reply, even after numerous follow up emails to the application. That was really a moment that we started to think “okay well if adults and big organizations aren’t going to help us then we will just do our own event and make it damn good too.” We were inspired by our anger and frustration but mainly we just wanted to create a space where LGBTQ+ youth felt recognized, important, and part of a community. 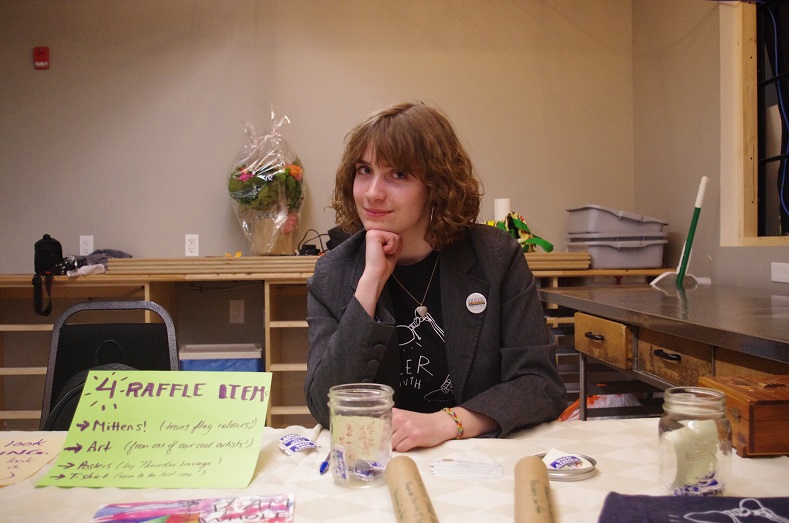 GAC: What challenges have you faced as youth arts organizers, and what has helped you to succeed?

QYA: There definitely were a lot of challenges. We were all in school and also working part time jobs, so adding the pressure of creating an event was hard. We had a lot of late nights from November to February. It was also tough since a lot of people who applied to the art show had to drop out due to exam stress. Another big challenge was that none of us knew what we were doing at all. We had help from some family members which was great but mainly we just had to figure everything out by ourselves. Collectively I think we’d only ever been to two or three art shows, maybe less. We had no previous experience with event organization really. There’s a lot more behind an art show than a lot of people might think and we dedicated a huge amount of our time to making it work. Obviously, the Guelph Arts Council was a huge part of our success and we’re very grateful to them. We have some amazing friends as well that helped us so  much, so it was not just us three (thank-you so much Katerina for driving us and 30+ people’s art around, and Taylor and Kyla for setting everything up with us and taking it all down after). We also had some amazing support from the community that really pushed us forward, everyone was really excited about the show and that was great to hear.

GAC: Queer Youth Arts was GAC’s 2018 Youth Opportunities Awards recipient. How did you use the award? What feedback did you receive from the public?

QYA: The majority of the award went towards the venue. We really wanted the show to be as accessible as possible and we are so glad we were able to have our show downtown which can be really pricey. We set our hopes high as well and got the biggest room we could find, we thought that might be wishful thinking but we’re so glad we did because the room ended up being packed. We created shirts and buttons as well which were really well received, we sold out in the first half an hour or so. I think the event was really well received by the public, it was way busier than we ever could have expected. We originally thought the event would be mainly youth but a lot of adults came out as well and that was really surprising in a good way. Afterwards we got a lot of people stopping us downtown or at our work places to tell us how much they enjoyed the show, and that was nice to hear. I think a lot of people felt that the show sort of filled a gap in events, something like it was missing, and that’s why I think it was so welcomed.

GAC: Where is the Queer Youth Arts Group today?

QYA: Today we’re all at University for various degrees. Victoria is doing a double degree in Physics and Electrical Engineering, Carling is studying Sustainable Agriculture and Food Systems, and I (Charlotte) am doing a degree in Cultural Studies. We’re all heading towards really different careers but we are still hoping to continue doing some community project events in Guelph when we come back in the spring and summers, but we have no idea what they are yet. Everything is really undecided at the moment. However since we are getting older we do want to make sure that high school students and people under 19 still have space to create in their communities and we don’t want to get in the way of that at all.