“From The Ground Up”

“From The Ground Up” is a brand new local print publication, highlighting art and community within the Guelph core. The zine was created by a collection of local artists and members of the community, headed by Nik Wever (Gain Media) and Shawna Hamilton.

The main goals of the zine are to highlight the many amazing talents within our community that make Guelph what it is today. The zine will feature everything from short stories to local happenings, poetry, art, and columns written by Guelph artists of all disciplines.

I had the chance to sit down with Nik Wever to talk about the zine and its creation.

James Florio: “So what is “From The Ground Up”?”

Nik Wever: “So “from the ground up” is a local theme that we started, focusing on arts and culture and things around Guelph in particular… and with the shift that happened with Gain Media from Gain Music, we always wanted to kind of have more going on and more and more happening… we figured we would do an actual in-print thing. Partly because we wanted to bring that vibe back like the punk revolution.

The more that we were talking to people and organizations and artists, there was just a lot of interest. And so we were like, let’s just go for it and put it together and send out as many emails as we can to the various organizations. Everyone really responded positively. So we’ve got a little spread on the inside that has like a timeline of Guelph and it shows when all the different, major festivals kicked up. So we were trying to just represent other organizations as well, but also partially bridge some gaps – showing that Guelph has so much going on and there’s all these great organizations.

James Florio: “You mentioned you had a lot of good reactions from the community and other organizations, and I had noticed through your Instagram that there’s quite a lot of people involved. Do you want to talk a little bit more about the curation process?

Nik Wever: “Yeah!…The first issue really is kind of like an intro, ‘cause it’s only about six pages front and back. So it just introduces some of the ideas and themes, but there’s one we wanted to show for July, kind of like the history of this place. So we were trying to pick people particularly who might be suited for those themes.

But yeah the curation of it’s been interesting, because it’s really just come from tossing the ideas out to people, telling them what the themes are like for August. We’re looking to have themes focused more in nature, a harvest kind of theme. And then going into September, we wanted to focus on events…”

Nik Wever: “…It’s open for submission. So, we’re really accepting a wide array of things that people are looking to submit, like largely it’s going to be arts, and art spaces…

…but we’ve got a section that’s called “Ask Your Uncle” where we’ve got, it was kind of like a throwback to the seventies and eighties rock magazines where you’d be asking a rock mom’s opinion on something …”


James Florio: “So the first issue has been a huge success. I noticed you guys have sold out and that you’re doing a second print run. Did you anticipate it to be so successful off the launch and, as it grows, how do you plan to continue to adapt to that demand?”

Nik Wever: “Well, this it’s honestly been such a huge change, you know, because it’s print media and it’s really not a field that I know much about. And so it’s been great having the advice and help, like from the folks at Otherwise Studios…, and it’s really been a big learning curve because when we were putting it together, the first issue was the file size was just huge for some reason. And I had to size it down and do all the settings. So I think it’s like the whole thing has just really been a learning process. So we’re trying to learn as we go and hopefully add to it and continue to grow it. The idea we felt and even with the name of the zine, is we’re starting from the grassroots and that’s always been important, I think, for a lot of people in Guelph…”

New issues of “From The Ground Up” will be released monthly, with a different theme or focus each month, to highlight all the different facets of art in our community. Submissions for the zine are constantly open and can be submitted via the zine’s Instagram pages or through Gain Media’s Instagram. Submission forms will be available online soon, once the new Gain Media website has launched.

“From The Ground Up” is currently taking orders for the second run of its first issue due to the overwhelming support they have received since the launch of the project.

Issues of “From The Ground Up” are available for purchase for $7 in print form, and more will be available online for $5 once the new Gain Media website has launched. As the zine grows Nik plans to make more copies available at pop-up locations and increase accessibility as the project develops. July’s theme focuses on the history of Guelph and its art spaces, containing many contributions from different artists and community members, showcasing the many parts of Guelph that make up the arts community. 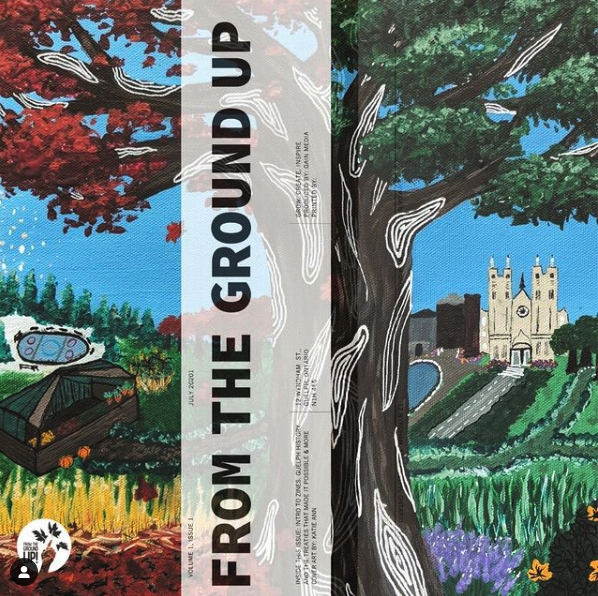